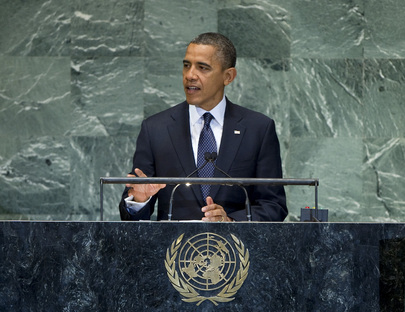 BARACK OBAMA, President of the United States, began his address by telling the story of Chris Stevens, a diplomat who had been killed recently in an attack on the American embassy in Benghazi, Libya.  Mr. Stevens, he said, had worked across the Muslim world, from Egypt to Syria, from Saudi Arabia to Libya.  He spoke Arabic; he walked the streets of the places where he worked, tasting the food and listening to the people.  When the upheaval in Libya began, he had cared for the wounded and helped to craft a future in which the rights of all Libyans would be respected.  “Chris Stevens loved his work” and saw dignity in the people he met.  He had embodied the best of the United States, building bridges across oceans and cultures.  He acted with humility, but stood up for the principles of liberty, dignity, justice and opportunity.  “The attacks on civilians in Benghazi were attacks on America,” he said, adding that there should be no doubt that the United States would be relentless in seeking out Mr. Stevens’ killers and bringing them to justice.

However, he said, the various attacks of the last two weeks were not just an assault on the United States, but on the very ideals upon which the United Nations was founded:  the notion that people could resolve their differences peacefully, and that diplomacy could take the place of war.  “If we are serious about upholding these ideals, it will not be enough to put more guards outside of an embassy […] we must speak honestly about the deeper causes of the crisis,” he stressed.  “Today we must affirm that our future will be determined by people like Chris Stevens, and not by his killers,” he said.

It had been less than two years since the world was captivated by the transformations in the Middle East and in North Africa.  The United States had supported the transitions in Egypt, Tunisia and Yemen, and it had intervened in Libya alongside a broad coalition and with a Security Council mandate, because the aspirations of people were more powerful than a tyrant.  “And as we meet here, we again declare that the regime of Syrian President Assad must come to an end so that the suffering of the Syrian people can stop and a new dawn can begin.”  “This is a season of progress,” he added, recalling elections had been seen across the Arab world.  Peaceful transitions of power had taken place in Malawi and Senegal, and a new President was in place in Somalia.  In Burma, a closed society was opening and people looked forward to further reform.  “Around the world, people are making their voices heard” and asserting their innate dignity, he said.

However, he continued, the path to democracy did not end with the casting of a ballot.  Quoting former South African President Nelson Mandela, he said, “To be free is not merely to cast off one’s chains, but to live in a way that respects the freedom of others”.  Freedom depended on the rule of law and due process, and “real freedom is hard work”.  Those in power needed to resist the urge to “crack down on dissidents”, and must instead focus on the painstaking work of reform.  Indeed, there would always be extremists who fanned the flames of hatred, he said.  The world had witnessed the convulsions that could accompany transitions to a new political order.  They often arose from the difficulties of reconciling tradition and faith with the diversity and interdependence of the modern world.

In that vein, he said, a “crude and disgusting video” had recently sparked out rage across the Muslim world.  He reiterated that the United States had had nothing to do with it, and that it was an insult both to Muslims around the world and to Americans, as well.  The United States had laws in place that protected individuals from harm “because of how they look or for what they believe”, he said.  Many people wondered why the United States did not just ban such a video, and to that he answered that the United States Constitution protected the right of all to practice free speech.  Americans had fought and died across the world to allow people to express their views, because in a diverse society, efforts to reduce speech could quickly become tools to silence critics and oppress minorities.  “The strongest weapon against hateful speech … is more speech,” he said, voices of tolerance that lifted up the values of mutual understanding and respect.

The United States recognized that not all countries believed in the right to free speech.  But, in today’s world, the notion that the flow of information could be controlled was obsolete.  The question was how to respond to hateful speech.  “There is no speech that justifies mindless violence,” he said; there were no words that justified killing, no slander that provided an excuse to cause death or destruction.

The United States would not seek to dictate the outcomes of transitions abroad, he continued.  But, it was the responsibility of all leaders to speak out forcefully against violence.  Hatred of the America, the West or of Israel could not be a political rallying cry, and it could not deliver on the promise of freedom.  “Smashing apart a restaurant does not fill an empty stomach,” but only made it harder to achieve what “we must do together:  educating our children and creating the opportunities they deserve, protecting human rights and extending democracy’s promise.”

The United States would not retreat from the world, he said.  Yet, efforts in the fields of development, energy and other areas depended on a spirit of mutual interest and respect.  For partnerships to be effective, citizens must be secure and efforts welcome.  Politics based only on anger set back international cooperation and set back those who tolerated it, he added.  In that vein, he reminded Member States that it was Muslims who had suffered the most at the hands of extremists.  The impulse towards intolerance and violence might initially be focused on the West, but ultimately it could not be contained, and would affect relationships between Sunni and Shiites, between tribes and clans.

On many issues, the world now faced a choice between “the promise of the future and the prisons of the past”, “and we cannot afford to get it wrong”.  Instead, he said, “we must seize this moment”.  The future must not be shaped by those who bullied women, but by girls who went to school.  It must not belong to the corrupt few who steal resources, but by students and business owners.  It must not belong to the vision of those who slandered religions or who denied the Holocaust.  It was time to heed the words of Mohandas Gandhi, who had said, “intolerance is itself a form of violence”.  People must work towards a world that was strengthened by their differences, not defined by them.

In the Middle East, the road was hard but the destination was clear:  an independent, prosperous Palestine and a secure Israel.  Understanding that such a peace must come through a just agreement between the parties, the United States could walk alongside all those that were willing to make that journey.  In Syria, the future must not belong to a dictator who tortured children or shot rockets at apartment buildings, and what began with citizens defending their rights should not end in a cycle of sectarian violence.  All Syrians must have a say in their Government, and that was the outcome towards which the United States would work.

In Iran, the world could see where the path of a violent and unaccountable ideology would lead.  Many there wished to enjoy peace and prosperity among their neighbours, he said; instead, the country continued to restrict the rights of its people and to “prop up” a dictator in Damascus.  In addition, Iran had still not yet demonstrated that its nuclear programme was peaceful or cooperated with the United Nations in that arena.  While there was still time and space to do so, he stressed that “that time is not unlimited”.  “Make no mistake, a nuclear armed Iran is not a challenge that can be contained,” he added, noting that it would threaten the security of Israel and the stability of the Gulf nations and the international economy.  That was why a coalition of Governments was holding Iran accountable, and the United States would “do what it must” to prevent it from acquiring a nuclear weapon.

It was because of the progress he had witnessed in his own lifetime, and in the past four years of his presidency, that he remained ever hopeful, he said.  The Iraq war was over and the transition had begun in Afghanistan.  Al-Qaida had been weakened and Osama Bin Laden was no more.  More power was in the hands of citizens across the world.  But, what provided the most hope was not the actions of leaders, but of peoples.  For every angry mob shown on television, there were billions who shared similar hopes and dreams, who reminded the world that there was “a common heartbeat to humanity”.  When all was stripped away, people everywhere longed for the freedom to determine their destiny, the dignity of work, the comfort that comes from faith, and the justice that existed when governments served their people — and not the other way around.  The United States would always stand up for those aspirations, he said.  He promised Member States that, long after Chris Stevens’ killers were brought to justice, his legacy would live on in the lives of the people he touched.  “So long as we work for it, justice will be done,” and the rising tide of liberty would never be reversed, he concluded.