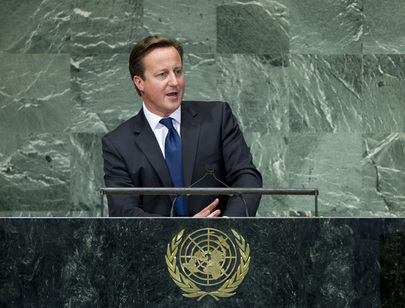 DAVID CAMERON, Prime Minister of the United Kingdom, noting his responsibility as co-Chair of the High-Level Panel on the post-2015 Development Agenda, said that more focus was needed on the “building blocks” that took countries from poverty to prosperity, including the absence of conflict and corruption, the presence of property rights and the rule of law.  “We should never forget that for many in the world, the closest relative of poverty is injustice,” he stated.  Although some believed that the Arab Spring had turned into the “Arab Winter”, pointing to the Syrian crisis, the lack of economic progress and the emergence of Islamist-led Governments in the region, he stressed that this was the “wrong conclusion”, and that it was not a time to turn back, but to redouble support for open societies.  Democracy was not about holding elections, but about establishing a foundation of democracy, the independence of the judiciary and the rule of law.  Each country had its own path, and at times, progress would be slow.  The damage of decades could not be “put right in a matter of months”, and the drive for justice and the rule of law was not responsible for the problem, but was part of the solution.

The United Nations, he went on to say, needed to step up efforts to support the people of countries struggling to build their own democratic future.  Progress had, in fact, been made, including elections in Libya to create a new Congress, and plans to integrate armed groups into the national police and army.  The “right response” to the murder of Ambassador Chris Stevens, which was a “despicable act of terrorism”, was to finish the work he gave his life to.  The majority of Libyans supported this, with thousands, this past weekend in Benghazi, taking to the street to protest extremist acts.  The Arab Spring also continued in Egypt where the President had asserted civilian control over the military, and in Yemen and Tunisia where elections had brought new Governments to power.  Morocco had a new Constitution and a Prime Minister appointed on the basis of a popular vote.  Somalia had just elected a new President.  “None of it would have come about without people standing up last year and demanding change and this United Nations having the courage to respond,” he underscored.

He went on to challenge the idea that the removal of dictators unleashed new waves of violence, extremism and instability.  Rather, he asserted that dictators had brought instability to the region through the denying of basic rights to their citizens, and the funding of terrorism overseas, among others.  Those rulers dealt with frustrations within their own borders by “whipping up anger” against their neighbours, Israel and the West.  Their citizens, denied jobs or a voice, were given “no alternative but a dead end choice between dictatorship and extremism”, he said.  The events of Tahrir Square illustrated the Egyptian people’s rejection of “this false choice”.

He acknowledged that although Syria presented profound challenges, the Arab Spring was not to blame.  “You cannot blame the people for the behaviour of a brutal dictator,” he stated, pointing out that Assad’s inflaming of sectarian tensions was similar to his father’s actions 30 years ago in the slaughter in Hama.  A future for Syria could not include Assad who, through recent evidence, was shown to use children as target practice and schools as torture centres.  “The blood of these young children is a terrible stain on the reputation of the United Nations,” he said.  If the United Nations was to have any value in the twenty-first century, it needed to join together and support a rapid political transition.  Security Council Members had a particular responsibility to support the United Nations appeal, and he announced that his country, already the third biggest donor, would be donating a further $12 million in humanitarian support to Syria.

The international community was also responsible for helping these countries reclaim stolen assets, noting return of billions of dollars to Libya.  The Egyptian Government was also entitled, as well, and a new British Task Force was being created to work with the Government to pursue the return of stolen money.  Concluding, he stressed that there was a fundamental difference between Islam and extremism, the former a great religion observed peacefully by over a billion people, and the latter a “warped political ideology” of a minority that sought to use religion for their own means.  As seen in Turkey, democracy and Islam could flourish alongside each other and he urged that Governments not be judged by their religions, but by their actions.  In that regard, he called for support to the new Governments of Egypt, Tunisia and Libya so that their success “strengthen democracy, not undermine it”.  The Arab Spring represented a “precious opportunity” for people to realize their aspirations and he called for the United Nations to do everything it could to support them.