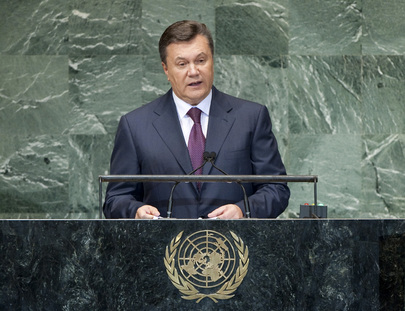 VIKTOR YANUKOVYCH, President of Ukraine, shared the deep concern about escalating violence in Syria, calling on all relevant parties to exert maximum efforts to settle the conflict on the basis of respect for the United Nations Charter and international law. Ukraine had never distinguished grief into “ours” and “theirs”, as seen in its humanitarian mission to Libya last year, during which people of many nationalities were evacuated from hostilities. Ukraine resolutely intended to use its capabilities to protect civilians in hotspots, and Ukrainian aircraft and ships used in those efforts would always be at the disposal of anyone needing help, regardless of nationality.

Condemning violence against diplomatic missions, he said Ukraine had supported the expansion of preventive diplomacy in international relations, with the United Nations playing a lead role. His country had initiated a dialogue and resolution on preventing human rights violations at the Human Rights Council, and participated in the Peacebuilding Commission. It would prioritize such work when it assumed chairmanship of the Organization for Security and Cooperation in Europe (OSCE) in 2013. In that role, Ukraine would work to strengthen regional security, consolidate the democratic institutions of its Member States, and increase OSCE’s efficiency in early conflict prevention. He urged States parties to the Treaty on Conventional Armed Forces in Europe to ensure its full application, as it was a “cornerstone” for stability in the continent.

He went on to say Ukraine fully supported the Secretary-General’s action agenda. To counter global threats, better cooperation among security and law enforcement agencies, best practices and confidence building measures were needed. The outcome document of the United Nations Conference on Sustainable Development had proven the ability of countries to reach compromise and Ukraine supported the approach to sustainable energy for all, sustainable consumption and production and ensuring urban development. Combating climate change was a global priority and Ukraine had acceded to Phase II of the Kyoto Protocol.

Turning to international security, he said Ukraine had been a steadfast supporter of nuclear disarmament and non-proliferation for more than two decades, having voluntarily renounced the third-largest nuclear arsenal in the world and removed the last stocks of highly enriched uranium from the country this year. Security guarantees for States that had renounced their nuclear stockpiles and made other strategic concessions should be reflected in internationally binding legal instruments. Also, 2012 marked his country’s twentieth anniversary of its participation in United Nations peacekeeping operations. Over that period, 34,000 Ukrainians had participated in more than 20 operations.

As for the rule of law, he said international efforts should remain centred around the United Nations, underlining that relevant international organizations should continue playing an important role in that sphere, including the Council of Europe and its Venice Commission. Advances in each of those areas would be impossible without a more efficient United Nations, the key to which was a reformed Security Council. Ukraine was ready to discuss all progressive concepts of such a reform capable of achieving maximum consent among Member States. Concluding, he said, “we must strengthen and preserve our unity” to face modern challenges.