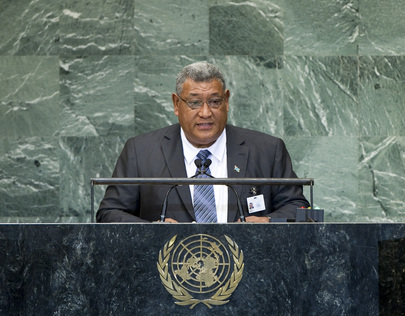 APISAI IELEMIA, Minister for Foreign Affairs, Trade, Tourism, Environment and Labour of Tuvalu, said that his country, which had became the 189th member of the United Nations in 2000, sought to bring the issue of small island developing States to the fore in the Organization’s work.  “Does the UN hear the plea of small island developing States for fair treatment by the international community?” he asked.  Today, 12 years later, Tuvalu considered its lasting concern “almost totally unanswered”, he said.

While appreciating the work of various United Nations entities on small island developing States, the focus had been almost entirely on “stating and indefinitely reiterating” their challenges and problems, he continued.  There had been nearly 20 General Assembly resolutions and numerous reports of the Secretary-General on the subject.  Two United Nations conferences had been organized, and now new momentum was building up towards a third in 2014.  Small island developing States needed special treatment, just like least developed countries, he said.

“We are told SIDS cannot be considered and dealt with as a special category,” he continued.  “Therefore, SIDS are only an abstract notion deliberately kept undefined, because any clarity or any debate — on who they are and what precisely could be done for them — would be too challenging or disturbing.”  That seemingly accepted sense of work on small island developing States in the United Nations did not match Tuvalu’s vision of what the world body should be doing to support them.

He also said his country greatly appreciated the decision by the Economic and Social Council to note the recommendation of the Committee for Development Policy to graduate Tuvalu from the least-developed category and consider the issue at its next substantive session in 2013.  Although Tuvalu had met two of the three graduation criteria, there was an urgent need to revisit those guidelines to ensure that they reflected and captured the real economic situation of countries eligible for graduation.  Treating Tuvalu in the same way as other countries was a denial of what decades of United Nations advocacy had set in place, he said.  “If the geographical limitations and extreme vulnerabilities of Tuvalu do not justify special consideration, what is the purpose of special and differential treatment, the cornerstone of international cooperation?”