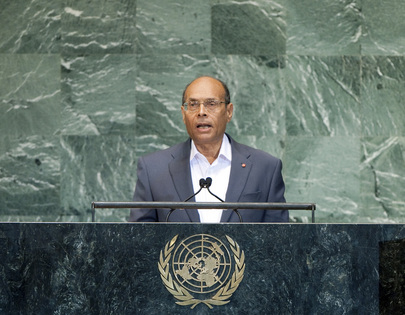 MONCEF MARZOUKI, President of Tunisia, said that, through its revolution, Tunisia had entered the fraternity of free and democratic people. But, also today, the world was witnessing a great evil, which had been exacerbated by violence and extremism. “These are issues that need to be seriously addressed,” he said. Such behaviour stemmed from extremist policies and had led to human carnage.

Describing his country’s experience, he said Tunisia had worked under United Nations auspices to establish peace and avoid confrontation. But, the freedom and democracy that people now enjoyed had come at a high cost: tens of thousands of people held as political prisoners, with hundreds of people killed and injured. Tunisia continued to confront multiple economic and social problems inherited from a regime that had lasted over two decades through sheer force of repression. That paled in comparison to the price being paid by Syrians, where thousands had been killed and the infrastructure destroyed, events that would impact Syrians for decades to come.

“Dictatorship is a disease,” he said, which impacted freedom and gave rise to hatred and violence. Europe had only known stability since the fall of the Nazi and communist dictatorships. Political maturity had since been acquired. He invited the United Nations to declare dictatorship a social and political “scourge” to be eliminated by a bold programme similar to that which had eradicated polio and small pox.

In that context, he said the International Criminal Court only tackled crimes after they had been committed, and mechanisms to prevent dictatorship from taking root were needed. Indeed, dictatorships gave themselves a “false legality” by organizing fraudulent elections and using democratic principles to undermine democracy itself. Tunisia’s dictator had done just that, with plans to rewrite the Constitution ahead of 2014 elections because he knew there were no internal or international mechanisms to prevent it. There was no Tunisian court to rule on such behaviour. Thus, a preventive mechanism should be part of the United Nations.

The United Nations Charter and the many international conventions were deemed to be humanity’s guide, he said, but what was missing was an implementation mechanism. As such, he proposed the creation of an international constitutional court, similar to the International Criminal Court, to denounce certain constitutions, or illegal charters and elections. That court would consider disputes, and rule on the legality of elections that did not align with the United Nations Charter. All democratic systems would need to be recognized by that tribunal. In turn, countries could seek advice from that body. Such a court would deter tyrannical regimes and strengthen the role of civic resistance.

In that context, he urged rapid intervention to save Syrian lives, and the deployment of an Arab peace force to help create a pluralistic peace. More broadly, he supported Palestinians on their quest for peace and an independent State with Al-Quds as its capital. Denouncing Islamophobia, he urged reducing the chasm between rich and poor. He also insisted on the need to free the Middle East from nuclear weapons. In closing, he stressed that Tunisia was a country of peaceful democratic revolution. The creation of an international constitutional court should make its way onto the Assembly’s agenda’s, an idea he hoped would garner international support, as that would help succeeding generations avoid a scourge that had cost the world so dearly.