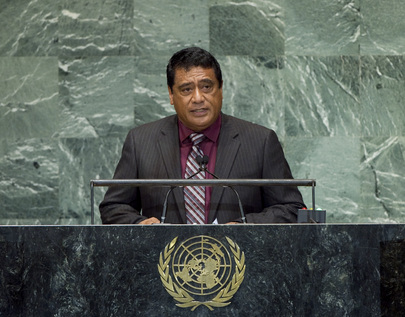 Lord TU’IVAKANO, Prime Minister and Minister for Foreign Affairs and Trade of Tonga, said his Government’s delegation, along with those of other small island developing States, had returned this past June to Rio+20, the United Nations Conference on Sustainable Development, to chart a new course for sustainable development. For those countries, the return amounted to a reaffirmation of the special and particular vulnerabilities of small island States recognized in 1992. In line with the Rio Outcome, Tonga planned to join other island nations in pressing for the finalization of plans to convene in 2014 a conference to follow-up the Mauritius Strategy for the further Implementation of the Programme of Action for the Sustainable Development of Small Island Developing States.

That summit should be held in the Pacific region, he said, especially as it would provide Pacific nations an opportunity to take stock of their efforts to implement the other Rio outcomes, as well as the status of the Millennium Development Goals in the region. On a related matter, he said that Tonga had joined other Alliance of Small Island States (AOSIS) nations at an event the previous day that had adopted a declaration on the continuing serious threats posed by climate change to the territorial integrity, viability and very survival of those States. “There is an urgent need to continue to address the security implications of climate change, including the impact on territorial integrity, the frequency and severity of climate related disasters, threats to water and food security, and the forced displacement of people,” he declared.

Small island developing States were challenging the wider international community, especially developed countries, to take the bold measures necessary to reduce greenhouse gas emissions to levels that would ensure a viable and meaningful future for their countries, he said, adding that safeguarding the survival of the smallest and most vulnerable was to safeguard a viable future for all States. “A rising tide may lift all boats, but it will drown us,” he said, stressing that the upcoming meeting in Doha, Qatar, of the States Parties to the United Nations Framework Convention on Climate Change, must advance efforts to bridge differences on key issues, including the future of the Kyoto Protocol, climate-related finance, closing the pre-2020 mitigation gap, and constructively addressing losses and damages associated with the impact of climate change.

He stressed that Tonga’s connection with its oceanic environment was one with deep historical dimensions. As custodians of the ocean and its fragile resources, Tongans had long appreciated that the health of the world’s waters was critical to maintaining a stable source of sustenance and livelihood for island communities. As such, he welcomed the Rio Outcome’s focus on sustainable fisheries and developing national capacities, as well as on the importance of access, small-scale and artisanal fisheries and women, as well as on the need for concerted efforts to address the vulnerability of coral reefs and mangroves. He went on to note that Tonga would build on its commitments made at Rio and Barbados to reduce its greenhouse gas emissions and improve its energy security to achieve a 50 per cent renewable energy mix by 2020.