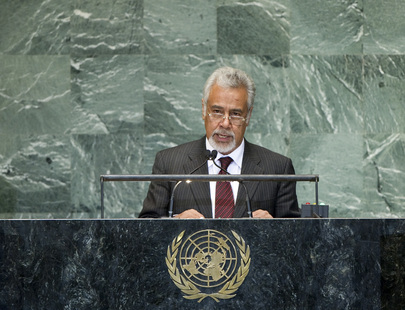 KAY RALA XANANA GUSMÃO, Prime Minister of Timor-Leste, said that, after overcoming the main obstacles of state-building, his country now looked to the future with optimism. The Government programme for 2012-2017, which outlined short-, medium- and long-term objectives, had been endorsed by Parliament. “Today we have a plan, a vision and a goal to transform Timor-Leste from a low-income country to a medium-high-income country by 2030”, he said, adding that “we want to be a prosperous and safe nation, with a healthy and educated population and with skilled employment for all”. However, in the short term, Timor-Leste would not meet the Millennium Development Goals by 2015, he said, adding that its current major challenge was the fight against poverty — a challenge facing “over 1 billion people in our planet”. Regrettably, around 20 per cent of the world’s population lived in conditions of extreme poverty and hunger, and the lack of access to water sources would remain insurmountable challenges.

Mothers and children throughout the world would continue to die tragically due to a lack of access to the most basic needs. “Unfortunately, these are the current projections for 2015,” he said. As such, it had been very timely of the Secretary-General to create a high-level panel to establish new guidelines for the post-2015 period, he said, adding that his delegation was proud to see a Timorese woman, Emilia Pires, Minister for Finance, among the its members. “Democracy must be an internal process”, he declared, charactering the process as sometimes long, but vital for a lasting solution. The most recent, dynamic and inspirational example had come from Myanmar, he said, hailing Aung San Suu Kyi as “a woman with an unshakable character, a born leader, a resolute democrat, defender of peaceful solutions and who is today an advocate for internal reconciliation”.

Citing climate change and food insecurity, he stressed the important role of the United Nations in meeting those global challenges. “The United Nations, which consists of all of us here today, has a duty to humanity”, he declared, adding that “we should all acknowledge that we are the privileged agents of the necessary collective change into a better and safer world”. It was vital to reduce the dominance of political and economic interests in favour of social and humanitarian ones, he said. That would require the mobilization of public opinion around the entire world concerning the values of peace and harmony between civilizations and cultures, mutual respect among societies, and tolerance between groups, through dialogue.

It could also start with reform of the Security Council, which should be more representative, he said. There was an imperative need to renew mindsets by incorporating new members, while energizing new commitments and responsibilities. Timor-Leste had been walking the corridors of the United Nations for 38 years, he pointed out, recalling that in the beginning, the nation had wanted to mobilize public opinion in favour of its cause and to warn the world that its fundamental rights were being violated. “Today, we have been informing the international community of our setbacks and our achievements in the construction of a sovereign State,” he said.