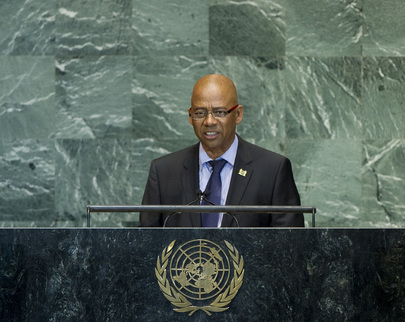 WINSTON G. LACKIN, Minister for Foreign Affairs of Suriname, said a combination of prudent fiscal policies and windfall earnings from trading crude oil, derivatives and gold had created a stable political and economic environment in his country. That stability had in turn become conducive to solid domestic and foreign investment in the more sustainable sectors, in which agriculture and tourism scored high. The design and construction of relevant infrastructure demonstrated a potential to put Suriname on the world map as a player on the supply side of strategic commodities, he said.

A social package presented by President focused on education and health care, he said. The President had made the point that while the nation’s strong international ratings were encouraging for investors, its people, who lacked the right opportunities, would only share in its achievements through job-oriented education at the academic and vocational levels; adequate health services and sport facilities; and access to potable water, information and communications technology, and proper waste disposal. The challenge of financing such an improved social package made it necessary to empower the productive and service sectors by providing funds and know-how to entrepreneurs.

Recalling that, as a young nation, Suriname was involved in an ongoing decolonization struggle relating both to its structure and mindset, he said building a nation constituted enormous challenges, given that its half-million-strong population comprised a “bouquet” of at least seven different ethno-cultural traditions originating from the Americas, Africa and Europe, as well as India, Indonesia, China and the Middle East. Suriname was known for the presence of a synagogue located next to a mosque in the heart of its capital. Christian churches coexisted with Hindu temples, as well as places of worship with a strong African affinity. The country had managed quite well to convert that challenge into a unique and exemplary benefit, he said, adding that colonial characteristics of “divide and rule” were gradually fading.

When Suriname had become a United Nations member 36 years ago, it was little aware of the Organization’s importance in a number of issues outside decolonization. Now, “we have grown in understanding,” he said, adding “a proper functioning United Nations, including a democratically based Security Council, had the potential to become the single most important stabilizing factor in a world that moved from bi-polarity to multi-polarity.” This Organization was built on the ashes of the Second World War and on the commitment to save successive generations from the scourge of war. Peaceful settlement of disputes was, therefore, the only avenue through which this planet would be saved from annihilation. This principle stand must be applied to all areas of conflict, whether in the Middle East, Africa, the Americans or anywhere else in the world, he noted.