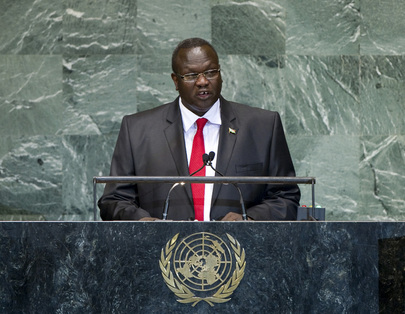 RIEK MACHAR TENY-DHURGON, Vice-President of South Sudan, while offering thanks to all those who had helped his country gain independence, “not the least the United Nations,” said independence had not, however, resolved all the issues between South Sudan and Sudan, including those relating to border demarcation, oil infrastructure, security and the final status of the disputed area of Abyei. At the same time, South Sudan had begun to lay the foundation for a prosperous, democratic and stable nation by establishing institutions for governance and service delivery at all levels. It was working for food security and economic diversity by using its oil revenues to develop agriculture and build basic infrastructure. Reforms had been carried out in the delivery of services, as well as public financial management, he continued.

Primary school enrolment had more than doubled since 2005, and alternative accelerated learning was offered to more than 200,000 youths and adults. Terms of service for teachers had been improved and tireless efforts were being made to meet the rapidly increasing demand for secondary education. However, much more had to been done, he said. “Our nascent nation had been tested enormously in its first year of independence.” Apart from conflict, it suffered severe economic hardship and abuse of public funds. The Government was taking serious measures to correct the latter and restore public confidence. It was also combating corruption through management reforms, the rule of law and improved accountability and transparency, in order to bring the management of resources closer to international standards. At the same time, armed militia groups were undermining the new country, and the Government had accorded high priority to reaching peaceful resolutions to internal conflicts, he said.

Four groups had already laid down their arms and had integrated voluntarily into the national army or civilian life. As for tensions with Sudan, he recounted the events leading up to the oil shut-down, stating that Sudan had blocked export shipments from Port Sudan and seized his country’s crude. South Sudan had temporarily taken over the area of Heglig in April to prevent it from being used as a launching pad for military attacks against its territory. It had withdrawn soon after, “in compliance with advice from the international community”, and the matter should be settled through peaceful negotiations. Regarding his Government’s alleged support for the Sudan People’s Liberation Army-North (SPLA-N), he said that was “misunderstood”. The South Sudanese fighters of the original SPLA had fought side by side with their northern comrades, but each had had its own objectives.

Since the Comprehensive Peace Agreement’s provisions on South Kordofan and Blue Nile States had not been credibly implemented, South Sudan had the obligation to help the SPLA-N address its legitimate grievance, as stipulated by the pact. It was shouldering the burden of an increasing number of refugees from the two States, he said, calling for humanitarian assistance to meet their needs. However, South Sudan would use its good offices as a former ally of SPLA-N to help mediate a peaceful and just resolution of the conflict. He went on to announce that today the Presidents of South Sudan and Sudan had signed an agreement that, if upheld by both parties, would amicably resolve the most significant causes of the disputes between them. It addressed oil and related economic matters, the status of nationals of the other State, boundary demarcation, other border issues, banking cooperation, trade-related issues, the division of assets and liabilities, and the facilitation of post-service benefits. However, agreement on Abyei had not been reached, with Sudan having rejected the recommendations of the African Union High-level Implementation Panel, he said. It was now incumbent upon the regional body and the Security Council “to take the necessary action for the way forward”.