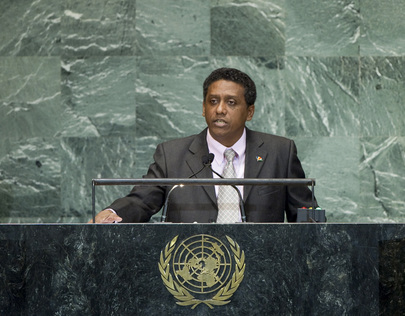 DANNY FAURE, Vice-President of Seychelles, said he was particularly concerned about the continuing challenge of maritime piracy, and a resolution of the political crisis in Madagascar. Piracy fundamentally altered “our relationship with our ocean” while instilling fear and uncertainty, he said, noting that two of his compatriots were still held captive in Somalia. “As long as they remain separated from their families, our ocean represents risk for our nation rather than the opportunity that it should.” Establishing the rule of law in Somalia was obviously the only true long-term and sustainable solution to piracy, he said.

He went on to say that his country was already working with Somalia’s central Government and the autonomous regions of Somaliland and Puntland in seeking the transfer of prisoners convicted of piracy to their countries of origin, where they serve their sentences. However, more resources were to accelerate the construction of appropriate infrastructure in those parts of Somalia where stability had been established. He said his Government and that of the United Kingdom, as well as other international partners, were in the process of setting up a regional anti-piracy prosecution and intelligence centre in Seychelles.

Turning to the crisis in Madagascar, he described it as a difficult trial for that country. The Seychelles continued to work for implementation of the Southern African Development Community (SADC) road map in that regard, and had hosted two meetings between former president Marc Ravalomanana and the President of the Transition, Andry Rajoelina. Those talks had generated a series of useful and relevant tools for restoring order in Madagascar, including an electoral timeline, he said, expressing thanks to the Transitional Government of Madagascar, which had provided the budget for the elections.

On the delimitation of maritime boundaries, he said that, “as an island State, we are conscious that the ocean must connect us and not divide us”. This year, Seychelles and Mauritius had agreed for the first time in the history of the United Nations on the joint management of a 300,000 square-kilometre extended continental shelf, which meant that the two small island developing States would be sharing that space for the development benefit of their two peoples. Additionally, Seychelles had recently announced its intention to stand for a non-permanent seat on the Security Council in 2017, subject to endorsement by the African Union, he noted. As one of the continent’s smallest nations, it understood keenly the need to fight for its economic independence. “Now more than ever, we need to invest in Africa’s economic freedom,” he declared, adding: “We must create the means by which Africa’s share of trade and financial power can increase at a faster rate.”