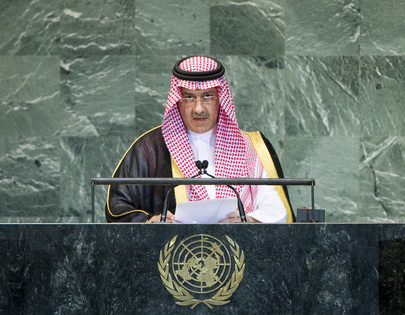 Prince SAUD AL-FAISAL, Minister for Foreign Affairs of Saudi Arabia, said the Palestinian question, which was the keystone of the Arab-Israeli conflict, remained a constant challenge for the United Nations, and could only be resolved by responding to the legitimate rights of the Palestinian people, particularly their right to an independent State with Jerusalem as its capital. That would end the Israeli occupation of Palestine and other occupied Arab territories, in accordance with the resolutions of international legitimacy, the principle of “land for peace” and the texts of the Arab Peace Initiative aimed at achieving a just, comprehensive, and lasting peace to the conflict. “ Israel is the side that should bear full responsibility for the stagnation endured by the peace process,” he added.

He said the Syrian crisis had resulted in tens of thousands of victims, and hundreds of thousands of internally displaced persons and refugees who had fled into neighbouring countries. “We regret that this regime continues to believe that it can proceed with its suppressive procedures to control the situation without any due regard to the high humanitarian losses,” he said. The Security Council’s failure to take a decision and to stop the bloodshed had given the Syrian regime “a green light” to proceed with its crimes against its own people “in a race against time”. Since the first day of the crisis, Saudi Arabia had been keen to deal with it within the framework and resolutions of international legitimacy, and with full respect for the principles of human rights and international humanitarian law. It had acted through the Gulf Cooperation Council, the League of Arab States and the United Nations, in line with the outcomes of the Islamic Summit on the Status of Syria, held in August.

Welcoming the peaceful transition of power in Yemen, he called on the international community to fulfil its pledges to that nation. Turning to Iran’s nuclear programme, he described the matter as “one of the most important challenges that threaten international peace and security in general, and the security and stability of the Gulf region in particular”. Saudi Arabia supported ongoing efforts to resolve the crisis peacefully and in “a manner that guarantees Iran and all countries in the region the right to peaceful use of nuclear energy according to the criteria and procedures of the International Atomic Energy Agency”. In addition, it was important that all parties intending to participate in the conference on the establishment of a Middle East free of nuclear weapons and other weapons of mass destruction adhere to the mandate and deadlines set out in the outcome document of the 2010 NPT Review Conference.