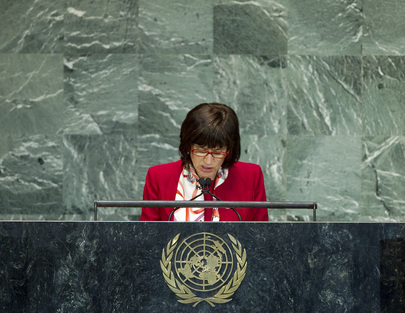 ANTONELLA MULARONI, Minister of Foreign and Political Affairs, with functions of Prime Minister of San Marino, said her country had always believed in the power of dialogue, democracy and respect for others as basis for peaceful coexistence among peoples. Referring to recent attacks on Western diplomatic missions, she strongly condemned any form of violence. “We don’t believe that violence is the right answer when someone feels hurt in his personal beliefs or opinions. Human life must be always above everything and everyone,” she said, emphasizing that the apt theme of this session came at a time characterized by ever-increasing and bloody conflicts.

In this vein, the United Nations role had become ever more fundamental, making the reform process crucial for future global stability, she said, including revitalizing the General Assembly, the Organization’s most democratic body and sometimes the only forum where a small State could express its opinions. Assembly reform was key to strengthening the global governance architecture and the process should include its political role and authority, as defined in the United Nations Charter. “The General Assembly should not be limited to that of a mere body where resolutions are adopted,” she said. “On the contrary, it should be a forum for exchange of ideas and debate, where solutions can be found to today’s challenges and where a global consensus on issues of common interest can be reached.”

Turning to the financial crisis, she said the response from the Group of 20 Summit and their central banks had sidestepped the worst affects, but the situation remained precarious and many developed countries would experience stagnation or recession, she said. Increased food prices had contributed to higher poverty rates and caused increasingly violent social tensions, as the crisis had become a global challenge that needed new strategies and a sense of solidarity among countries and people. The session’s thematic debate on the state of the world’s economy should be repeated annually, at least until the crisis had been overcome, she said. “This organization should play a leadership role in the promotion of fair and inclusive growth, sustainable development and elimination of poverty and hunger,” she said.

Covering a range of security issues, she first emphasized the need for reform to ensure an enlarged, more representative, transparent and efficient Security Council. Over the last few years, some new bloody and violent conflicts had broken out. The world had also assisted a massive popular uprising across North Africa and the Middle East, where young people were at the forefront of the Arab revolution. The world must support them in their struggle for democracy, liberty and social justice, she said. Regarding the Syrian conflict, she condemned atrocities taking place and hoped the Council would soon reach an agreement on how to settle the crisis. The Assembly’s commitment to the crisis reflected an important mission: to keep peace worldwide and ensure respect for freedoms and human rights.

With regards to the improvement of disaster prevention and response, she said that theme had recently gained greater importance on the political agenda. A fundamental way to reduce risks was to invest in the most vulnerable regions and build capacities necessary to prevent disasters. In the short term, it was essential to provide political and financial support, she said. She was grateful to the Office for the Coordination of Humanitarian Affairs and Central Emergency Response Fund. Humanitarian aid and sustainable development were intertwined and success in providing an efficient response to natural disasters had a direct impact on the capacity to achieve the Millennium Development Goals. The General Assembly resolution “The future we want” was an important step. “Now the most important thing is that the commitments undertaken be respected so that the future wanted and written in the resolution will turn into reality,” she said, emphasizing that persons with disabilities, women and children must be part of that future.