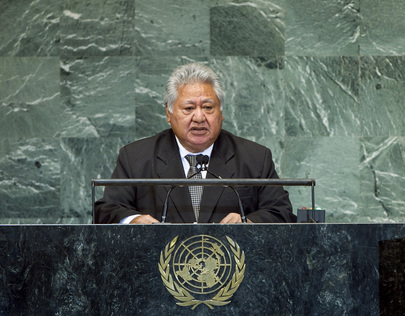 TUILAEPA SAILELE MALIELEGAOI, Prime Minister of Samoa, began his address by recalling that, half a century after his country’s own independence, there were still territories in the Pacific region where people had not been able to exercise their right to self-determination. In the case of French Polynesia, he therefore encouraged the metropolitan power and the territory’s leadership, together with the support of the United Nations, to find an amicable way to exercise the right of the people to determine their future.

Turning to sustainable development, he said that the Rio+20 Outcome Document provided a blueprint of “the future we want”. For Samoa, amongst the gains achieved by that document was the reaffirmation that small island developing States were a special case for sustainable development due to their unique and particular vulnerabilities. “But acknowledging [small island developing States] vulnerabilities without attendant resources to strengthen their resilience makes this goal nothing but a hollow victory,” he stressed. The decision to hold a small island developing States review meeting in 2014 was, therefore, both important and timely, and Samoa’s offer to host the meeting was a matter of record. The year 2014 also held special significance for the country, as it was also slated to graduate from the category of least developed country.

The Millennium Development Goals were not mere “aspirations of what might be”, he continued, but were “tangible outcomes of what should be”. By their very nature, they were a restatement of peoples’ development needs and hopes. Thus, for Samoa, the achievement of the Goals by 2015 was not a matter of pride, but of necessity; the country would do everything possible to bring about that result. Success also meant that the nation would start the post-2015 Sustainable Development Goals framework at higher thresholds, which would help to spur greater effort to improve the lives of more of its people.

With regard to those post-2015 Goals, he emphasized that clear, time-bound, targeted and measurable benchmarks were critical. It was important to ensure that the post-2015 development agenda built on the important progress of the Millennium Development Goals and was expanded to cover broader sustainable development issues, as agreed in Rio. In addition, the international community must ensure that the important priorities emerging from the outcome of the 2014 small island developing States meeting were also integrated into global development frameworks, and that such a strategy comprehensively addressed the needs of the small island developing States.

In that vein, he said, climate change was the world’s most urgent problem, requiring a decisive global response. It was a challenge that should unite the international community, not divide it. “Entrenched positions devoid of today’s realities and in pursuit of unrelated agendas do not have a role in our collective effort,” he stressed. All countries were impacted by climate change to varying degrees; no one should stay detached and unconcerned about that common plight. The world must work together with a sense of urgency to address climate change “today, not tomorrow”. It should not just be science that recommended what should be done, he added, but also the conscience of States and their political will to follow through.

He announced that, this week, he had deposited Samoa’s Instrument of Ratification for the Kampala Amendments to the Rome Statute of the International Criminal Court to demonstrate the faith of his country in the rule of law. Serious disputes had recently arisen amongst bordering States, he said, and he encouraged resolution through peaceful settlement arrangements. In that respect, “Member States can only do so much”. What was needed was a committed Secretariat that was aware and sensitive to the needs of the peoples it existed to serve. That was why Samoa supported the Secretary-General’s vision to create a professional career service that was flexible and mobile to allow for quick and positive responses to the diverse demands of Member States.