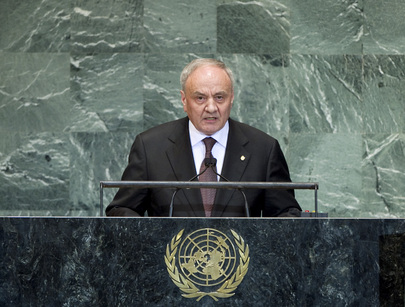 NICOLAE TIMOFTI, President of the Republic of Moldova, said that after years of political turmoil, Moldova was enjoying political stability that allowed it to develop and modernize. It was firmly committed to European integration, had instituted socioeconomic reforms, and aimed to establish the rule of law, comprehensive judicial reform and economic modernization. Aid from European partners was very important towards that end. The perpetuation of armed conflict, begun 20 years ago in the Transdniestrian region, did not offer any real benefit to most people on both banks of the Nistru River. Rather, it undermined national security and territorial integrity, hampered economic development, divided society, isolated the Nistru population, incited human rights violations and generated economic stagnation on the left bank of Nistru. There was no alternative to a reunified Moldova. The Transdniestrian region should be granted special status within Moldova, thus giving it a comfortable level of self-governance. Defining that special status was at the core of the political negotiations in the 5+2 format, which should result in a reasonable compromise based on sovereignty and territorial integrity. By promoting business links, ensuring freedom of movement, protecting human rights, improving security and combating criminality, Moldova would better prepare the ground for a political solution, he said. In order to build confidence rather than divide the two sides, it was imperative to transform the existing military peacekeeping mechanism into an international civilian mission. International partners had essentially contributed to ending the conflict; growing assistance from the European Union was encouraging. He called on the Organization for Security and Cooperation in Europe (OSCE), Russian Federation, Ukraine, European Union and the United States to work together towards a final solution to the Transdniestrian conflict. Russian forces present in the Republic of Moldova territory without the consent of the host nation and contrary to the constitutional framework and international commitments should be withdrawn. Globalization and the global financial crisis illustrated the need to reform the United Nations, particularly the Security Council, he said. All reform proposals should take into account the legitimate aspirations of all regional groups, including the Eastern European group’s call for another non-permanent Council seat. Moldova would continue to support efforts to comprehensively reform the Organization to make it more efficient, transparent, accountable and representative. He stressed the importance of United Nations ties to regional organizations. During the current Assembly session, Moldova would strongly support consideration of the issue on cooperation between OSCE, Council of Europe, Black Sea Economic Cooperation Organization and others. Moldova and other members of the GUAM Organization for Democracy and Economic Development would actively advance the Assembly’s consideration of the draft text on cooperation between the GUAM and the United Nations. He stressed the importance of the high-level meeting on Monday on the rule of law and said strengthening the rule of law would help maintain peace, promote development, and enhance cooperation. He fully supported international efforts to exert constant control over, and take the necessary steps to prevent, unlawful development and delivery of weapons of mass destruction. Moldova was taking significant steps towards arms control. In cooperation with partners, it was adapting to global standards of export control, improving cross-border management of small arms and light weapons and actively cooperating regionally and internationally in arms control. Joint efforts and standards were needed to promote international law and human rights standards, he said. Acts of aggression, including attacks on personnel and the integrity of diplomatic facilities, violated international norms and deserved firm condemnation. As a member of the Human Rights Council from 2010 to 2013 and as Vice-Chair of the Assembly’s Third Committee (Social, Humanitarian and Cultural) during the previous session, Moldova continuously pledged to open-mindedly advance the cause of promoting and protecting human rights worldwide. He supported the renewal of global commitments made at the Rio+20 Conference and the agreement to devise the Sustainable Development Goals.