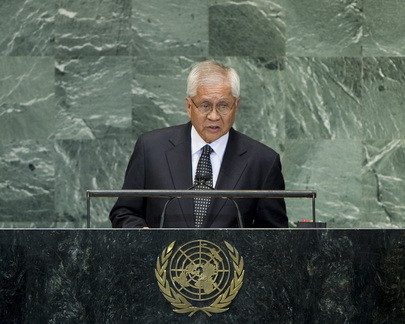 ALBERT F.DEL ROSARIO, Secretary of Foreign Affairs of the Philippines, stressed the importance of the rule of law, saying his country had learned from its past. Its advocacy on that subject was not only been borne out of its experience as a United Nations founding member, but also out of its national experience. Its freedom was hard-won and democracy had only been realized after decades of dictatorship. The President had placed the rule of law at the centre of governance, and as a result, the culture of impunity had been neutralized, he said, adding that the economy was on the upswing and people’s rights and freedom were assured. The full force of the rule of law must be brought to bear in preventing the proliferation of nuclear weapons, promote nuclear disarmament and end the flow of illicit weapons, he said. The Philippines had presided over the 2010 Review Conference on the Treaty on the Treaty on the Non-Proliferation of Nuclear Weapons, and the meeting’s historic adoption of 64 action points had strengthened the instrument’s legal regime. The Philippines supported nuclear weapons free zones, including the one that the Association of South-East Asian Nations (ASEAN) had created regionally, he said, adding that the Comprehensive Nuclear-Test-Ban Treaty was another critical pillar of global disarmament and non-proliferation, he said, commending Indonesia for having become the latest Annex 2 State to ratify it, and reiterating calls for the remaining eight to accede at the earliest possible time. He said that, as a major contributor to United Nations peacekeeping operations, his country recognized the importance of women in promoting peace, and continued to deploy more female peacekeepers. The nation aimed to surpass the 10 per cent deployment target for women in terms of country troop contingents and 20 per cent for police deployment. On migration, he said it remained an “unheralded and underappreciated” dimension of globalization today. The reality was that hundreds of millions lived and work outside their native lands, providing benefits to both their host and home nations. Earlier this year, the Philippines had ratified two key international instruments affecting migrants worldwide — the Maritime Labour Convention and the Convention concerning Decent Work for Domestic Workers, bringing those two agreements into force next year. Recalling that 2012 marked the thirtieth anniversary of the adoption of the 1982 Manila Declaration on the Peaceful Settlement of Disputes, he said that document remained applicable to the present day and was a stark reminder that “we have yet to overcome the barriers that divide countries and people all over the planet.” Given the intensified maritime disputes in Asia, the United Nations Convention on the Law of the Sea had never been more relevant than it was today, he said, adding that all States must respect their obligation to settle maritime disputes by peaceful means, without threats or use of force, under the Convention. A rule-based approach under the Convention could help peacefully resolve the disputes, he said, pointing out that his country faced the most serious challenge to the security of its maritime domain, the integrity of its national territory, and the effective protection of its marine environment.