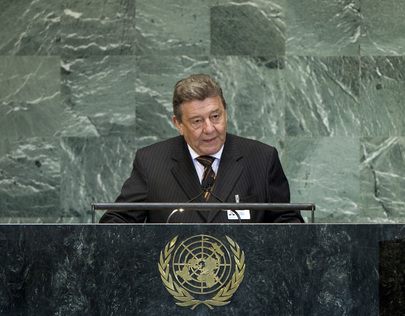 RAFAEL RONCAGLIOLO ORBEGOSO, Minister for Foreign Affairs of Peru, reaffirmed his full respect for the International Court of Justice, calling on States to refer cases to it and to comply with its rulings, in line with Chapter XIV of the Charter. Recourse to the Court was not an unfriendly act, but eloquent testimony of peaceful will. He condemned the use of force and violence in Syria and called upon all parties to the conflict immediately to cease hostilities and start a genuine dialogue in the framework of respect for the country’s independence and sovereignty and the fundamental rights and freedoms of its citizens. Peru supported the efforts of the Secretaries-General of the United Nations and the Arab League in that regard.

Reaffirming his country’s recognition of a Palestinian State, he said Peru had established diplomatic relations with it and supported its admission as a Member State of the United Nations. Condemning the unfair, illegal economic, financial and commercial blockade on Cuba, and expressing regret over the lack of a solution thus far to the dispute over the Falkland Islands (Malvinas), he called upon Argentina and the United Kingdom to start a dialogue with the aim of resolving it. To overcome such challenges the United Nations needed reform, he said, stressing that the Security Council must become more efficient, transparent, democratic and representative, with a greater role for developing countries in peacemaking and security issues. Now was the time to institute that reform.

He said his country had deposited the instruments of ratification for the Convention on the Protection of All Persons from Enforced Disappearance, the Convention on Cluster Munitions and the amendments to the Montreal Protocol regarding ozone-depleting substances, and called upon all countries to follow suit. He said it was a moral imperative to ensure that perpetrators of grave crimes against humanity be properly tried and sanctioned. The rule of law demanded more inclusive societies, in which everyone had equal civil, political and social rights. Peru had incorporated the International Labour Organization’s (ILO) Convention 169 into its national legislation, the first country to do so, he said. As a result, indigenous peoples would be able fully to exercise their fundamental rights to the same degree as other citizens.

Given the magnitude of transnational organized crime, supported mainly by drug trafficking, greater efforts were needed to combat it, he said, recalling that last June, his country had organized the International Conference of Ministers of Foreign Affairs and Heads of Specialized National Agencies against the World Drug Problem in a bid to resume a political dialogue that had not taken place in almost 20 years. Peru would organize a global conference in November to exchange information and resources on combating that ill. Since last June, Peru had chaired the Presidency Pro Tempore of the Union of South American Nations, which aimed to turn the region, already a nuclear-weapon-free-zone, into a zone of peace and prosperity. He also welcomed the Colombian President’s efforts to open a path of dialogue to end several years of violence in that country, and announced that in the coming days, Peru would host the Third Summit of South American and Arab Countries.