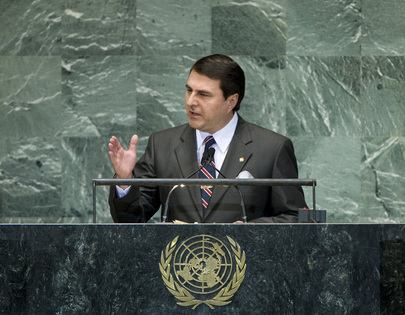 LUIS FEDERICO FRANCO GÓMEZ, President of Paraguay, said he would be addressing the Assembly “for the first and last time” today because he was serving out the presidential mandate of his country’s former leader through August 2013. Explaining the events that had led up to his assumption of the presidency, he said that on 22 June, “the history of Paraguay changed forever” as the national Congress, exercising its constitutional powers, unanimously impeached the former President. The legislature had sought to end a very serious political crisis threatening the country — in which 17 Paraguayans had lost their lives — and to avoid further bloodshed and grief, he said, adding that, as standing Vice-President, he had assumed the office of President, as mandated by the Constitution.

He went on to say that since those events, he had governed peacefully and democratically, and the Government took pride in the fact that Paraguay had no political prisoners, no one had been exiled and the freedom of the press and of expression were fully guaranteed. Yet, while the country enjoyed normal diplomatic relations with most other United Nations Member States, it found itself in a “difficult position” created by its neighbours in the Southern Common Market (MERCOSUR) and the Union of South American Nations (UNASUR), both of which had imposed sanctions on Paraguay without allowing it the right to defend itself. In violation of international treaties, the two blocs had attempted to become the “custodians of Paraguayan democracy”, he said.

Throughout its history, Paraguay had suffered repeatedly as a result of “arrogant intervention in its internal affairs”, he continued, noting that none of the Government’s detractors had been able to uncover any violations of regional or international treaties and agreements during his short time in office. “ Paraguay will never accept intervention by foreign Powers in its internal affairs,” he declared. “We will continue building upon our democracy according to the will of the Paraguayan people, exercised through our elected institutions. Neighbouring countries should reflect on their actions and move to reconstruct the currently compromised South American integration process. “Peace is built through dialogue, to which we are open,” he said, adding that when the next President was elected in August 2013, the health and strength of Paraguay’s democracy would be confirmed.

Devoting the rest of his address to issues farther afield, he touched on United Nations reform, noting that changes were needed in order to adapt the Organization to current realities. Foremost among them was the gradual elimination of the veto wielded by permanent members of the Security Council. On sustainable development, he stressed that the goals set at the 1992 United Nations Conference on Environment and Development (UNCED) — better known as the “Earth Summit” — must be “the backbone” of the Organization’s work in that area. As the world’s largest per capita producer of clean energy, Paraguay would continue to make progress on developing it, he said. Among other issues, he also cited his country’s participation in peacekeeping operations, including Paraguayan nationals working under difficult circumstances as military observers in Syria.