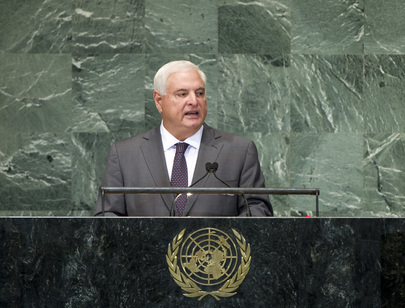 RICARDO MARTINELLI BERROCAL, President of Panama, said his country advocated the peaceful resolution of all international conflicts through multilateral organizations and using tools such as mediation, cooperation and dialogue. The search for those tools must involve legitimate representatives of the parties to a conflict, who must make efforts to recognize the rights of their counterparts while complying with their own obligations to reach just and permanent solutions. For that reason, Panama considered that Palestine had the right to be recognized as a national State, but must solve its differences with Israel, he said. Expressing concern over violence in the Middle East and the severe crisis in Syria, he reminded all parties concerned that a peaceful solution was the only acceptable means to achieve a just and permanent solution. He condemned the killing of the United States Ambassador to Libya and recent attacks against diplomatic premises belonging to France, Germany, Israel, Saudi Arabia, United Kingdom, United States and Turkey.

Describing education as one of the great keys of conflict resolution, he said: “Education not only sets us free, it makes us free thinkers. It helps us understand and respect different ideas.” Access to information through the Internet and social networks was an indispensable condition for elevating the level of knowledge among all populations. “A well-educated child today ensures healthy and peaceful coexistence for our nations tomorrow,” he said. “Without education, there is no possibility of dialogue and vice versa.” Yet he expressed concern about the risks to which the misuse of cyberspace could expose children and teenagers, and stressed his country’s support for the International Telecommunications Union’s efforts in that regard. “Let us harness information and communications technologies for the benefit of development and for a better quality of life for our infants,” he said.

Panama offered a contribution to the international community and the United Nations via two large-scale projects, he said. The first was the United Nations Regional Hub for Latin American and the Caribbean, which would host 16 regional and subregional offices of the world body and contribute to its operational processes, as outlined in the Delivering as One document. The other project was the Regional Humanitarian Assistance Logistics Centre for the Americas, intended to deliver aid in the event of disasters in the region. Panama’s economy had moved up nine places, from 49 to 40, in 2011-2012, according to the Global Competitiveness Index, demonstrating the greatest growth in Latin America, and allowing the country significantly to reduce unemployment and extreme poverty without compromising the richness of its environment. Panama would keep advocating for an institutional multilateral structure that would reinforce the right of all peoples to a planet with an environment that allowed the development of a healthy and peaceful life, he said. “There is still time to share as brothers and sisters the feast of our existence in a peaceful planet that belongs to us all.”