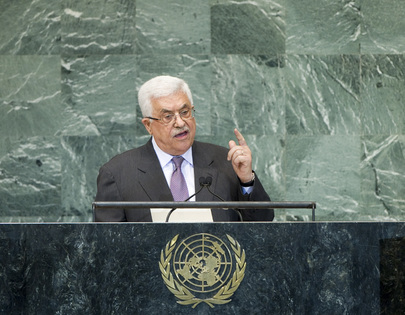 MAHMOUD ABBAS, Chairman of the Executive Committee of the Palestinian Liberation Organization and President of the Palestinian National Authority, said attacks by the “terrorist militias” of Israeli settlers had become a daily reality, with at least 535 attacks perpetrated since the start of 2012. Palestinians faced relentless waves of attacks against their mosques, churches, homes and schools. Increased attacks should not surprise anyone; they stemmed from a policy that prioritized settlements and a racist climate fuelled by a “culture of incitement” in the Israeli curriculum and extremist declarations.

Since the Assembly’s last session, Israel had continued its settlement campaign in Jerusalem and its environs, he said, aiming at altering the city’s historic character. It was a campaign of “ethnic cleansing” against Palestinians by demolishing homes, revoking residency rights, denying basic services, closing institutions and impoverishing people through a “siege” of walls and checkpoints. Settlement building continued throughout the West Bank, while attacks persisted against the Gaza Strip. He urged that Israel be compelled to respect the Geneva Conventions, lift the blockade of Gaza and investigate the detention of Palestinian prisoners and detainees in Israeli jails.

He said Israel continued to impose severe restrictions on movement, preventing the Palestinian National Authority from implementing infrastructure projects and providing services to its citizens. Its overall policy was undermining the Authority’s ability to carry out its functions and implement its obligations. Such actions were taking place amid an Israeli political discourse that brandished extremist positions, which incited religious conflict. “This is something we firmly reject,” he said, stressing that such discourse only fuelled those trying to use tolerant monotheistic religions as ideological justification for terrorism.

To surmount that impasse, Palestinians had held exploratory talks with Israel at the start of the year, upon Jordan’s initiative, he said, and had made efforts to create favourable conditions to resume negotiations. But Israel’s actions in his homeland and position on permanent status issues had led him to conclude that Israel rejected the two-State solution. A State of Palestine coexisting alongside Israel represented the “historic compromise” of the Oslo Declaration of Principles adopted 19 years ago under United States auspices, by which Palestinians had accepted to establish their State on only 22 per cent of the territory of historic Palestine. Israeli measures aimed to empty the Oslo Accords of their meaning, making their implementation extremely difficult if not impossible.

Further, Israel refused to seriously discuss the issue of Palestinian refugees, he said, and continued its occupation of Palestinian water basins, agricultural land, air, skies and borders. It refused to allow Palestinians to attain their rights and rejected the independence of a State of Palestine. “I speak on behalf of an angry people,” he said, calling Israel’s evasion of accountability a license for it to continue its policy of dispossession and ethnic cleansing.

Despite the complexity of the reality and all the frustration, “there is still a chance — maybe the last — to save the two-State solution and to salvage peace,” he said, urging a new approach based on an understanding that a racist “settler colonization” must be condemned, punished and boycotted. It also required reaffirmation of and adherence to the terms of reference endorsed by the United Nations. Marathon talks were not needed, but rather the sincere intention to reach peace. The approach must include realization of an independent Palestinian State, with East Jerusalem as its capital, over all territory occupied by Israel since 1967, as well as an agreed solution to the Palestinian refugee issue, in line with resolution 194 (III), as prescribed in the Arab Peace Initiative.

The international community must now uphold its responsibilities, he said. He called on the Security Council to adopt a resolution on the foundations for a solution to the Palestinian-Israeli conflict, which would be the basis and foundation and serve as a “binding reference” if the two-State solution was to survive. The independence and freedom of a State of Palestine was a sacred right that must be realized. The Palestinian National Authority had affirmed its ability to create an advanced model for a modern State, achievements recognized by the Ad Hoc Liaison Committee and the World Bank, among others. A year ago, he had submitted the application for consideration by the Security Council to allow the State of Palestine to assume its rightful place in the United Nations, efforts that were aborted despite the fact that the overwhelming majority of countries supported them. A year later, “ Palestine” was playing its role in the United Nations Educational, Scientific and Cultural Organization (UNESCO) with high professionalism.

His Government would continue its efforts to obtain full membership for Palestine at the United Nations, he said, and had begun consultations with regional organizations and Member States aimed at having the General Assembly adopt, during this session, a resolution considering the State of Palestine as a non-Member State of the United Nations. Today, 77 per cent of Palestinians were younger than 35 years old and they would not allow a new Nakba to occur. All Palestinians would continue to survive on their beloved land, every inch of which carried evidence of their roots. “There is no homeland for us except Palestine,” he said. Palestinians would continue peaceful resistance, in line with international humanitarian law, against the occupation for the sake of freedom, independence and peace. “Let peace be victorious before it is too late,” he said.