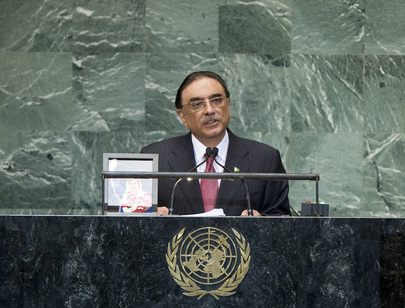 ASIF ALI ZARDARI, President of Pakistan, said his country had gone above and beyond the call of duty in fulfilling its international responsibilities. It had consistently been among the top contributors of troops to United Nations peacekeeping operations for many years, and today, more than 10,000 of its forces wore the blue helmets in the service of people around the world. Furthermore, Pakistan’s election to the Security Council reflected its commitment to world peace and security, as well as the international community’s vote of confidence. The United Nations represented common aspirations for peace and development, but it needed reform, he said. It must become more democratic and accountable. The legitimate aspirations of any people should be accommodated peacefully and in a manner consistent with sovereignty and territorial integrity, he said, adding that Pakistan supported the right of the Palestinian people to an independent State and to the admission of Palestine as a full member of the United Nations.

He recalled the loss of more than 7,000 soldiers and policemen, over 37,000 civilians, and several Government officials, including Pakistan’s first elected female Prime Minister and his wife, Benazir Bhutto, to extremism. Terrorism and extremism had destroyed human lives, torn the country’s social fabric, and devastated its economy, he said, adding that he was present not to answer, but to ask questions on behalf of his people whose lives had been lost to terrorism. Turning to Afghanistan, he said Pakistan’s doors had been open to its Afghan brothers and sisters but it had been left to fend for itself and its Afghan guests. Recalling the dictatorial regimes that were responsible for suffocating and throttling Pakistan, its institutions and its democracy, he called attention to the judicial execution of Pakistan’s first elected leader, Shaheed Zulfiqar Ali Bhutto, the jailing of other elected leaders, the 12 years he had himself spent in prison, and the billions provided by the international community to support those dictatorships.

The country’s social fabric and its very character had been altered, he said, adding that “our condition today is a product of dictatorships”. No country and no people had suffered more than Pakistan in the struggle against terrorism. How much more suffering could it endure? Describing how democracy had brought about major changes in his country, he listed the completion of a full five-year term by the first civilian Government in Pakistan’s 66-year history; the passage of unprecedented reforms by Parliament; the restoration of the 1973 consensus Constitution; and the establishment of the National Commission on Women, the National Commission on Human Rights, and a truly Independent Election Commission to ensure free, fair and transparent elections. The media were free and uncensored and civil society was flourishing under the protection of democracy, he said. Millions of families had also benefited from the Benazir Income Support Programme, the first social safety net created with the support of Pakistani women, for the weak and less privileged. It had not only helped the poor, but also empowered women in their households, he said.

As evidence of its cooperation with other countries in the region, he said Pakistan had begun to engage at all levels of the Afghan political spectrum. Believing in a sovereign, stable and secure Afghanistan, he said “what is good for the Afghan people is good for Pakistan”. He stressed the need for the international community to support the 3 million Afghan refugees in his country, so they could return home with dignity. Similarly, Pakistan’s relations with India, based on mutual trust and communication, were growing, he said, adding that he had been was encouraged by his discussions with the Prime Minister of India, with whom he had met last month in Tehran — their fifth meeting in four years. On the territorial dispute between the two countries, he stressed Pakistan’s continuing support for the right of the people of Jammu and Kashmir peacefully to choose their destiny, in accordance with the Security Council’s long-standing resolutions on that matter. Kashmir remained a symbol of the failures of the United Nations system rather than its strengths, he said, emphasizing that the resolution of those issues could only be reached in an environment of cooperation. To further build regional cooperation, Pakistan would be hosting a quadrilateral summit next month, and signing the Afghan-Pakistan Transit Trade Agreement, he said.

The representative of Pakistan, speaking in exercise of the right of reply, emphasized that the references to Jammu and Kashmir in President Asif Ali Zardari’s statement to the Assembly had not been unwarranted.  Jammu and Kashmir was not an integral part of India, nor had it ever been.  He went on to read from the President’s statement, stressing that Pakistan’s leader had called for a comprehensive solution to the issue, including through negotiations and discussions on how to improve the region’s social and economic conditions.