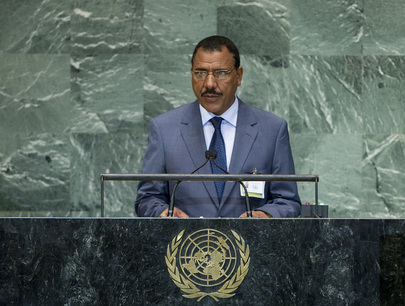 MOHAMED BAZOUM, Minister of State for Foreign Affairs, Cooperation, African Integration and Nigerians Abroad of Niger, questioned whether freedom of expression also meant the right to publish cartoons or produce a film that insulted Islam. He renounced such acts and likened them to anti-Semitism and racism. Those who insisted that they were different failed to recognize that they were deeply hurtful to Muslims. Nonetheless, such insults could not justify the outbreak of violence in Libya, and he condemned the murderous attack against the United States Consulate in Benghazi. He expressed the sincere condolences of the people of Niger to the United States, adding that those “savage bands do no justice to this great religion as they behave similar to those who they claim to denounce”.

Regretful that the promise of freedom, equality, justice, rule of law, national and international solidarity were yet to be achieved, he said the lack of regulation of the global economy, the domination of banks, unfair trade, and growing inequality between nations had led to disorder and disrupted global peace. Additionally, the rise of terrorism and the threat of criminal forces controlling parts of the world worsened global tension. “Anticipating conflict and dispute is the best way to prevent them,” he said.

Stressing the need for global economic growth that would benefit all, he said regulatory mechanisms must put an end to the hegemony of financial capital and unfair trade and that available resources must be directed, not towards speculative activities, but towards real economic investment. Niger would benefit from this approach, he said, adding that if a country like his obtained a fair price for its raw materials and was able to control those exports, then it could achieve the Millennium Development Goals by 2015. That was one of the ambitions for the “Renaissance of Niger”, a plan of action submitted by President Mahamadou Issoufou. The Government had also prepared a Plan for Economic and Social Development for 2012-2015, the financing for which was being organized at a donor meeting to be held in Paris. The initiative “3N: Nigeriens Feed Nigeriens” was an integral part of that plan, he added.

He invited all bilateral and multilateral, private and public partners of Niger to actively take part in that programme and thanked all those who had responded to the President’s appeal during last year’s session and had answered the call for assistance following a poor harvest. The mobilization of Niger’s citizens, the Government and its partners had prevented the drought from turning into famine, and had allowed them to prepare for a successful agricultural season, which promised a good harvest despite flooding in the country.

Turning to the situation in Mali, he recalled the request by President Issoufou during the Group of Eight (G-8) summit in Deauville to not lose sight of the consequences of the Libyan conflict in the Sahel region, noting that his worries were confirmed by the rebellion in Mali and the coup d’état that followed in March. The situation in Mali was a serious threat to the security and stability of the member States of ECOWAS, he said, warning that the Jihadists who had taken over northern Mali and destroyed World Heritage Sites aimed to conquer all of Western Africa. They would not stop there and would attack Europe and the entire world, he cautioned. “Clearly the threat is global, so the response must be global, immediate and without hesitation.” The international community and particularly the Security Council, in cooperation with ECOWAS and the African Union, must act without further delay to restore unity, democracy and peace in Mali.