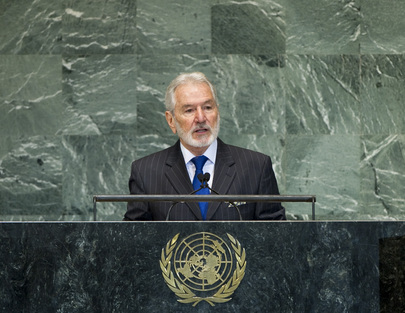 SAMUEL SANTOS LÓPEZ, Minister for Foreign Affairs of Nicaragua, said the changes taking place in science, the economy, geopolitics, ecology and culture represented true revolutions, but also cast doubt on the effectiveness of international organizations in conducting global affairs. The current global landscape demonstrated how governance exercised by capitalism was taking the world to the edge of civilization instead of being a factor for positive transformation. The commonly perceived struggle between the market and the State was really a paradox, he said, noting that the State often developed new neoliberal programmes devoid of scruples or disguised as necessary adjustments that were certainly permanent, rather than temporary, measures.

He said the world of 1945 that had seen the foundation of the United Nations no longer existed and there was need for reform, if not complete reinvention, since existing proposals had not progressed due to the politics of some permanent Security Council members. Peace was a supreme condition for ensuring human development, yet dangerous paths had been established, including the blockade of Cuba, he said, calling for its lifting, as well as the release of five Cuban patriots unjustly serving prison terms in the United States. In addition, the peace process in Colombia should be fully supported, as should international law in respect of Ecuador’s diplomatic mission in the United Kingdom. Nicaragua supported Argentina’s sovereign rights over the Malvinas (Falkland Islands) and the right of Puerto Rico to full independence.

Strongly condemning acts of terrorism that had cost the lives of high-level Syrian Government officials and civilians, he said such aggression had been condemned by the International Court of Justice in the 1986 Nicaragua v. United States case. It was evident that the mediation promoted by the United Nations was “going nowhere, simply because it is being blocked by some Member of NATO and its allies with interests in the region”. Nicaragua called for a peaceful solution on Iran, he said, adding that the aspirations of the Palestinian people must be resolved through negotiations. They deserved their own State and to be part of the United Nations. He also strongly condemned the attacks in which the United States Ambassador to Libya and three other citizens had been killed, as well as acts of terrorism against civilization, culture, religion and justice in any part of the world.

He addressed a number of challenges in Central America, reaffirming his country’s commitment to disarmament, and describing drug trafficking as a major problem. There was a need for countries receiving the drugs to eradicate both trafficking and consumption through technology and other resources at their disposal. The region had made great strides in strengthening its economic, political, social and cultural integration, and had united through the Central American Integration System and other bodies to further its development. The principles and purposes of the Non-Aligned Movement was a common platform contributing to the development of a multipolar world, he said.