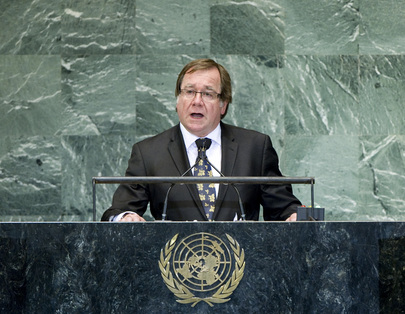 MURRAY MCCULLY, Minister for Foreign Affairs of New Zealand, said the Pacific Islands Forum had been making good progress in finding regional solutions to challenges, and hopefully this week’s meeting between the Secretaries-General of the Forum and the United Nations would mark the beginning of enhanced high-level engagement between them and greater understanding of the region’s needs.  The Pacific had addressed its security and stability challenges reasonably well, he said, noting that the most recent development was the withdrawal of the security component of a regional assistance mission in the Solomon Islands.  The United Nations, particularly the Security Council, could do more to acknowledge and support the regional leadership in the Pacific and elsewhere on peace and security matters.  While democracy, the rule of law and human rights had recently been challenged in Fiji, progress had been made towards holding free and fair elections there in 2014.

As Forum Chair, New Zealand had focused on several development priorities, he said.  Revenue from fishing was the main source of income for many of the region’s poor States, but they had received too small a return due to illegal fishing practices, unreported catch and inadequate management.  However, solid progress was being made in improving surveillance, training monitors and introducing better management practices to protect the region’s tuna stocks and ensure that their owners received their fair share of resources.  Renewable energy was also a high priority for the region, which was heavily dependent on fossil fuels for electricity and crippled by the high cost of imported diesel.  The Forum was working to correct the lack of progress in translating climate-change rhetoric into renewable-energy practice, he said, adding that by year’s end, Tokelau, fully dependent on fossil fuels, would be more than 90 per cent resourced with renewable solar electricity.  There had also been good progress on renewable energy in Tonga and the Cook Islands, thanks to New Zealand-funded projects, he said, noting that a renewable energy pledging conference early next year would aim to match donors, suppliers of concessionary and commercial finance, and others with renewable energy plans in neighbouring countries.

He expressed frustration over the Security Council’s inability to act on Syria.  “If 25,000 deaths, countless thousands injured, and many more thousands displaced and homeless is not enough to get the Security Council to act, then what does it take?” he asked, calling on the Assembly to play a more active role in the Council’s “absence”.  He also called for practical reforms holding the prospect of attracting widespread support so as to enable Council members to move past attempts to maximize individual positions, and expressed support for the so-called “intermediate solution” of creating a new category of elected seats for larger countries that felt underrepresented compared to permanent members.  “To ask the P5 to acknowledge and respect the genuine concerns of the wider membership by voluntarily accepting a curb on the exercise of the veto is an entirely reasonable and achievable objective,” he said.

New Zealand had been among the countries that had led the opposition to the veto when the United Nations had first been established, he recalled.  At that time, the permanent members had argued that the veto was necessary to protect their vital national interests, but they had exercised it routinely in circumstances having little to do with such interests.  He called on the permanent members to respect their original argument and voluntarily agree not to wield the veto in situations involving mass atrocities.  The Council and relevant Assembly organs should respond positively to requests from the Economic Community of West African States (ECOWAS) for support in dealing with the conflict in Mali and the Sahel, he said.  New Zealand, a “small country, with a big voice, and an approach that is fair-minded and constructive”, was a candidate for election to the Council for the period 2015-2016, he said.  Concerning the text on Palestinian status, he said it was a very poor substitute for direct discussions between the Israeli and Palestinian leaders.  On Iran, he said the country must be told to step back from a course that risked a nuclear “breakout” in the region.  Meanwhile, he called on Israel’s Prime Minister to freeze settlement construction while negotiations proceeded and to engage in direct talks with the Palestinians.