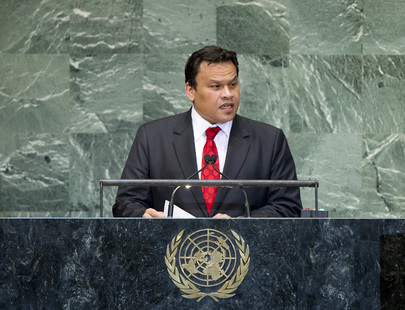 SPRENT ARUMOGO DABWIDO, President of Nauru, said unfulfilled promises stretched back decades, with multilateralism degrading in many ways into a scramble for finite resources and a fight for a bigger piece of the economic pie, sugar-coated with empty rhetoric. International agreements contained reaffirmation after reiteration of non-binding commitments to live up to lofty ideas. Perhaps their greatest value was as a reminder of how little had been achieved, he said. “Our words must have meaning if our multilateral institutions are to remain effective in addressing our emerging global challenges.”

That dynamic could not be more evident than in climate-change negotiations, he continued, noting the terrifying news that Arctic Sea ice had dropped to its lowest level in recorded history. A growing number of studies were concluding that the window on limiting temperature rise to even 2° Celsius was rapidly closing, while greenhouse-gas emissions climbed higher each year with no end in sight. Rather than increasing the urgency of the response, there had instead been efforts to delay action until 2020. For multilateralism to be credible, those countries with the greatest capacity must immediately start to remake the energy infrastructure by reprioritizing their pre-2020 mitigation ambitions and mobilizing the necessary finance, technology and capacity-building measures.

States must realize that the atmosphere was so polluted that many dangerous climate-change impacts were unavoidable, he continued, urging the United Nations to address the related security implications. Indeed, climate change would become a bigger driver of conflict in the future unless steps were taken to prepare. While scepticism about the Security Council’s involvement in climate-change discussions was understandable as that body did not reflect the diversity of United Nations membership, the time had come to remedy the issue. Reform must provide a forum for addressing the security challenges of all countries, not just the most powerful.

Turning to sustainable development efforts, which had also been “graced” with an abundance of “lofty rhetoric”, he pointed out that healthy marine ecosystems were vital to the sustainable livelihoods of small islands. Fishing was not just another economic sector; it was often the only significant one and must be jealously guarded. While the Rio+20 outcome contained few concrete deliverables, it did capture the Pacific small island developing States’ vision of a “blue economy”, which, if implemented, could help stem the decline in fish stocks. He also urged support for the Third Global Conference on Small Island Developing States, to be held in the Pacific in 2014. In closing, he invited support for continuing dialogue between the two sides of the Taiwan Strait, and encouraged the parties to the East China Sea dispute to recognize Taiwan’s “positive role in consolidating peace and stability in East Asia”. He also called for a peaceful settlement of the situation in South Ossetia and Abkhazia, and acknowledged Palestine’s right to statehood as part of a peaceful two-State solution.