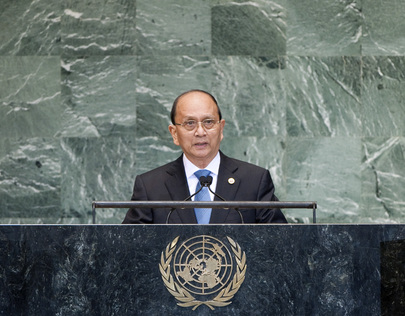 THEIN SEIN, President of Myanmar, affirming that his country’s foreign policy valued peaceful settlement of disputes in accordance with the theme of the high-level session, said that his country was making progress on its democratic path despite the challenges. “Within a short time, the people of Myanmar have been able to bring about amazing changes,” he stressed, adding, “I feel greatly privileged and honoured to dutifully serve as their President at this crucial time.” The country was leaving behind an authoritarian system to put in place a democratic Government and a strong, viable parliament with a system of checks and balances.

Accomplishments so far, he said, included the granting of amnesty to prisoners, the dignified return of political exiles, the convening of free and fair elections, the abolition of media censorship, the opening of free Internet access, the establishment of workers’ and employers’ organizations and increased participation in the political process, which he said was now characterized by tolerance and dialogue. Noting that opposition leader Daw Aung San Suu Kyi was now chairperson of a committee in Parliament, he congratulated her for the worldwide honours she had received. Hoping reforms would pave the way for better living standards for the people, he said laws were being adopted by Parliament with the goals of ensuring that income gaps did not widen, protecting citizens’ rights, preserving the natural environment, bringing workers’ rights to international standards and ensuring transparency and impartiality in the extractive sectors of the economy.

He said that the country was also working hard to bring an end to longstanding conflicts in its ethnic regions, with ceasefires having been agreed to with 10 armed groups. Peace talks would continue along with the strengthening of confidence-building measures, aiming for a lasting peace agreement. In the north, the leaders of the Government Peace Work Committee and the Kachin armed groups were following such a process to prevent further loss of life and property. In addition, a national-level, independent commission had been established to investigate the recent communal violence in Rakhine state and to report to him.

He affirmed that all inhabitants of Myanmar, regardless of race, religion and gender, had the right to live in peace and security and that the commission would include respected representatives from not only all strata of society but also from the Buddhist, Muslim, Christian and Hindu faiths. Field visits to Rakhine had been facilitated, in addition, for representatives of international organizations and foreign diplomats, and aid access had been granted to “those organizations who are willing to provide it to both the communities without discrimination”. Solving the issue would require sustained attention on multiple levels. He stressed that, as a sovereign State, his country had the right to secure its borders and to protect its sovereignty. It would do its best to resolve the issue in line with international norms.

“ Myanmar’s democratic transformation will be a complex and delicate one that requires patience,” he said. Understanding and support was needed from the international community, as well as from the people of Myanmar. “It is equally important that Myanmar should be viewed from a different and new perspective. It is also necessary for us to be able to work in a more conducive and favourable environment than ever before,” he added. The country would be participating more actively in the United Nations, taking on “the challenges of the twenty-first century in a bold and resolute manner”. In that light, he paid tribute to the legacy of his countryman U Thant, the third Secretary-General of the United Nations.