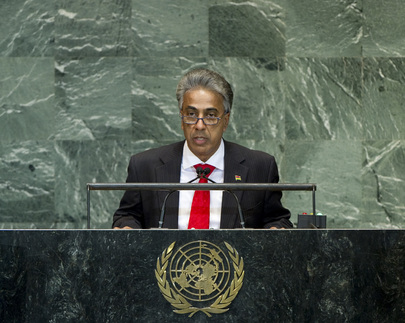 ARVIN BOOLELL, Minister for Foreign Affairs, Regional integration and International Trade of Mauritius, said that severe crises threatened countries that had the least responsibility for their cause, and developing countries were faced with challenges from climate change to youth unemployment. More equitable and inclusive growth, the fight against corruption and the promotion of green growth were overriding priorities. Sound national frameworks were needed, but the increasing importance at the international level was unquestionable, because of the growing interdependence of all economies. Nations must resist protectionist measures as an easy way out and there must be a transformative agenda for integrated sustainable development.

The General Assembly played a crucial role in all such efforts, he said, as did the Economic and Social Council and the United Nations Conference on Trade and Development (UNCTAD). Greater regional cooperation was necessary as well, for pooling of resources and coordinating policies, particularly in the area of sustainable energy. International cooperation in tapping the resources of the seas was particularly important, he added, welcoming the recognition at Rio+20 that the small island developing States present a special case. He hoped there would be concrete action in that regard, with focal points established in all United Nations entities for that purpose. Developed countries must honour their commitments in that regard. He looked forward to the follow-up to the Rio+20 Conference, welcoming the appointment of the High-Level Panel on the post-2015 development agenda.

In addition, he said that the world could not turn away from the suffering of Syrians and Palestinians. While affirming the utmost respect for all faiths and religions, he stressed that there was no justification for violence however great the outrage, also supporting the fundamental principle of protection of diplomats and diplomatic premises. Support for the roadmap to a speedy return to constitutional order in the neighbouring State of Madagascar was also an important matter.

The rule of law must be supported at the national and international level, he said, adding that nations, especially the small ones, must have avenues for peacefully resolving all disputes with other States. In that context, he said that the United Kingdom excised part of Mauritian territory prior to independence and had refused to enter into talks in good faith over that dispute, while keeping the issue out of the International Court of Justice. “Thus the decolonization of Africa has not been completed”, he stated. Enforcement mechanisms for international law were also needed. The full realization of his country’s territorial integrity also required a settlement on Tromelin. In that regard, he looked forward to continued dialogue with France in a spirit of mutual cooperation.