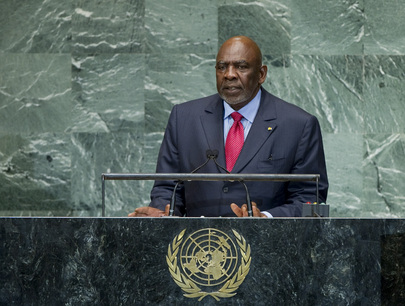 CHEICK MODIBO DIARRA, Prime Minister of Mali, said that for Mali it was particularly important to settle disputes by peaceful means. The country’s north was occupied by armed groups comprised of drug traffickers, terrorists and bandits that were committing human rights violations. Mali had asked the International Criminal Court to prosecute such odious acts, which constituted crimes against humanity and war crimes. Among them were amputations, summary executions, rape, torture, looting and destruction of cultural monuments and sites. On 1 September the Interim President asked ECOWAS to recover the occupied territories as part of the fight against terrorism. The Secretary-General, France, United States, African Union and the European Union had referred the matter to the Council. A lasting solution to the Sahel situation required stronger, more dynamic cooperation among States in the Sahel. He supported the holding of a meeting of Heads of State and Government in the region to build capacity and also to enhance coordination of existing regional mechanisms.

Algeria, Niger and Mauritania had joined Mali in setting up a joint patrol mechanism based in Tamanrasset, Algeria, he said. He called for international support to effectively implement it. The situation of aggression and occupation in northern Mali was a consequence of the Libyan crisis. That was underscored in the joint United Nations-African Union report adopted by the Council in January 2012. The presence of terrorist groups of various nationalities on Malian soil should mobilize the international community to take joint, rapid, effective action. He reaffirmed Mali’s determination to continue to work with other core countries to fight terrorism, transnational organized crime and subversive trends in the Sahara-Sahel region. He reaffirmed the Government’s commitment to negotiate with those who were not terrorists. It was not ready, however, to negotiate issues that called into question Mali’s territorial integrity.

The conflict in northern Mali had led to the deterioration of already precarious humanitarian conditions, he said, pointing to the more than 350,000 people that had fled the fighting, the more than 84,000 internally displaced persons, and the more than 268,000 refugees in neighbouring countries. The situation had impeded children’s access to education, damaged schools and equipment, and displaced 85 per cent of teachers and 50,000 students. Many schools were now occupied by victims of floods in the south. Mali was facing enormous humanitarian needs, including for housing, food, health care, education and nutrition. On 31 July 2012, the Head of the Office of the United Nations High Commissioner for Refugees (UNHCR) said the crisis in Mali was one of most neglected humanitarian situations in the world. Still, only $49 million of the $153 million appeal for relief aid had been received.

During her visit to Mali in August, the Under-Secretary-General for Humanitarian Affairs and Emergency Relief Coordinator had recalled the need for $213 million, he said, calling for greater mobilization by all partners to coordinate aid. In August 2012, a national unity Government had been set up to facilitate the quick recovery of the occupied areas in the north and the organization of democratic, transparent, just and credible elections. He called on the Council to adopt a resolution authorizing military intervention, so the Malian army could re-gain security of it national territory. “We want to see the immediate presence of that force”, he said, stressing the Malian people’s hope that the Council would duly consider that request. He thanked ECOWAS, the African Union and the United Nations for their efforts to end the Mali crisis, which threatened the stability of the subregion and Africa at large.

He called for a more in-depth dialogue to ensure more stable resources and financing for development to achieve the Millennium Development Goals, particularly in health, education, food security and the environment. Climate change was affecting living conditions in the Sahel. The expanding desert, deterioration of the ecosystem, floods, and poor rainfall underscored the need for appropriate responses to ensure sustainable development. The United Nations, which had a crucial role in building a new world order based on justice, solidarity and sustainable development, must be reformed in line with current realities. He called for correcting the historic imbalance that continued to deny Africa a permanent Council seat. The situation in Mali was a manifestation of security problems in the Sahel. The appropriate United Nations mechanisms must prevent an even worse situation for other people in the Sahel. The security risks in northern Mali seriously threatened the entire region and, in the long term, the rest of the world.