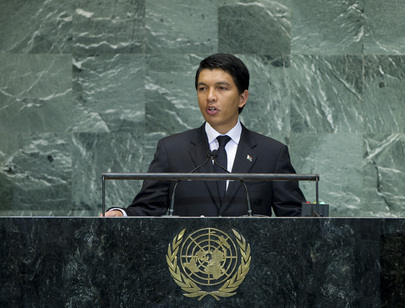 ANDRY NIRINA RAJOELINA, President of the High Transitional Authority of Madagascar, calling to mind the deaths of innocent civilians who died every day, strongly condemned the loss of human life, not only in Syria, but in other parts of the world. All States and organizations must unite forces for peace and security around the world, he said, adding that “we cannot be passive witnesses to actual and future disasters”.

Recognizing that national conflicts transcended borders and became problems of the international community, he stressed the importance of diplomacy and international negotiations in solving current challenges: impunity, instability in the Arab and Muslim world, the case of Somali piracy, illegal immigration, internally displaced, religious conflicts, land and sea border management, and food security. The world was in upheaval and several countries were in the midst of transition. People demanded change and hoped for sustainable development, he said, adding that they must be supported, encouraged, and not sanctioned.

In that regard, he highlighted the situation in Madagascar which had emerged from a political crisis, saying that with the involvement of the Southern African Development Community, the support of the African Union, the Indian Ocean Commission, and the International Francophone Organization, a road map had been signed and adopted by the political parties in September 2011. Commitments had been honoured and institutions of transitional government had been put in place, notably the Government of the National Union and Transitional Parliament. That road map had also allowed a launch of the political process, he said.

“ Madagascar needs to take the future into its own hands, write its own history and end the cycle of instability”, he continued, through the holding of fair and transparent elections and the creation of the Independent National Electoral Commission of the Transition. An electoral timetable had been set in cooperation with the United Nations and presidential elections were slated for 8 May 2013. He called on the international community to support this electoral process which is the only sure “path to democracy”.

During three and a half years of transition, despite all destabilization attempts, the Transitional Government had worked tirelessly to protect its people and solve social problems. Also, despite the suspension of aid and international subsidies which represented 60 per cent of the State budget, it had been able to carry out its administrative functions and honour its commitments and debts. Although Madagascar was one of the least developed countries, he continued, it is among the least indebted, with a rate of debt that amounted only to 5 per cent of its gross domestic product. It was, therefore, possible to develop the country and create wealth for its people.

“The best way to help us is to trust us, honour your commitment and let us shoulder our responsibilities”, he stressed, adding that the Malagasy would decide its destiny without the influence of any country or external pressure.