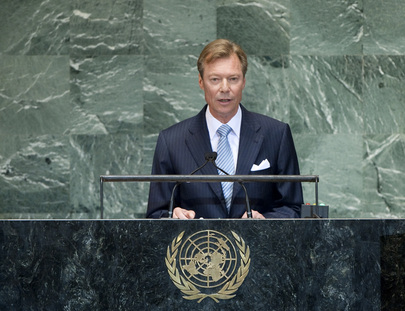 HENRI, Grand Duke of Luxembourg, said that since the establishment of the United Nations Charter in 1945 his country had found in multilateralism the “ideal framework to flourish” as an independent, sovereign State. Thus, since that time, his country had committed to contributing to building peace and promoting sustainable development “for the greatest number”. The peaceful settlement of disputes was an overarching objective of the Organization, and the Charter gave a major role to the Security Council, the General Assembly and the International Court of Justice. In this regard, the crisis in Syria, which continued to worsen, was a “challenge to our conscience”. However, in response to accusations of “inaction” by the United Nations, he stated that the responsibility lay with those responsible for the violence, war crimes and human rights violations and that, one day, they would “have to answer for them”.

However, the failure to solve the Syrian crisis “should not lead us to neglect the search for a political solution to other crises”, he continued. The Israeli-Palestinian conflict had been “going on too long” and that it was essential for parties to start anew with direct negotiations toward a sustainable peace. His country had for many years supported the political and economic development of the Palestinian State, including financial support to the Palestinian Authority and contributions to the United Nations Relief and Works Agency for Palestine Refugees in the New East (UNRWA), among others. Further, between 2012 and 2015, Luxembourg would provide assistance in the amount of €15 million to Palestine refugees.

His country also contributed to the peaceful settlement of disputes through a committed participation in multilateralism within the United Nations system, he said. Luxembourg had been one of the first countries to recognize the jurisdiction of the International Court of Justice as compulsory, and it contributed financially to preventative diplomacy and mediation activities. It also supported regional organizations, such as the African Union, and in 2010 it supported the mediation efforts by the Community of Sant’Egidio between political and civil society actors in Guinea and in Niger.

“To ensure durable peace, one must tackle the root causes of conflicts,” he stated. His country was focusing on two issues in this regard, including social inequality that resulted from persistent poverty, and scarcity of natural resources. In terms of development aid, Luxembourg had reached the United Nations goal by dedicating at least 0.7 per cent of its gross national income to official development assistance, with this aid exceeding 1.0 per cent in 2009 and 2010.

The effects of global warming were “catastrophic” and threatened to undo progress made toward the Millennium Development Goals, he said. He called for more commitments to be made in reducing carbon emissions, and for more adequate financial and technological resources to be allocated to the most vulnerable countries, so that they could adapt to climate change. Referring to the Rio+20 Conference, he urged that the international community act together. “It is a matter of survival,” he stressed, and the United Nations was where the international community could organize its collective survival.

Disarmament and non-proliferation were priorities for his country, he went on to say. Despite the “setback” in the past year, his country remained committed towards an Arms Trade Treaty where the international community could successfully combat uncontrolled arms circulation. His country also participated in peacekeeping activities, with contributions to United Nations operations in Kosovo, Lebanon and Afghanistan, among others. He urged that the Organization be given the support and means to be at the centre of multilateral action, and to “press ahead” with reforms, including reform of the Security Council by allowing new permanent and non-permanent members to service on the Council. His country had announced it would be a candidate for a non-permanent seat for 2013-2014. “Size does not matter when it comes to the commitment to effective multilateralism,” he said in conclusion. Rather, echoing the Secretary-General’s address to his country’s Parliament this past year, it was the depth of a nation’s commitment to the wider world.