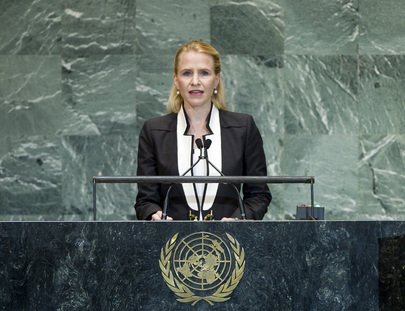 AURELIA FRICK, Foreign Minister of Liechtenstein, recalled that when the Assembly had met in 2011, it had already been hearing many calls for an end to the crisis in Syria.  The situation had since turned into a civil war that “puts the United Nations to shame”.  Open divisions in the Security Council and little interest on the part of the parties to the conflict in United Nations-led mediation were evident, she said, describing such blatant disregard for the lives and rights of civilians as “simply shocking”.  The crisis was an existential challenge for the United Nations, which was only as effective as its political organs allowed it to be.

The Security Council remained unable to carry out its tasks because of disagreement among its permanent members, she said, adding that it was therefore essential that the General Assembly step in and play a more active role, as it had done on some occasions.  That was all the more important because the international community was faced with a failure to fulfil the responsibility to protect a civilian population, a principle adopted by the Assembly at the highest political level.  The stalemate in the Council illustrated the need to examine the way in which veto power was and could be used, without questioning its existence, she said.  Calling upon permanent Council members to acknowledge that the Charter did not grant them the right of veto “without any strings attached”, she asked them not to block any Council action aimed at preventing or ending genocide, crimes against humanity or war crimes.

She went on to join Switzerland in calling on the Council to refer the situation in Syria to the International Criminal Court, which, celebrating its tenth anniversary this year, had enjoyed “astonishing success”.  Earlier this week, therefore, Liechtenstein had launched a ministerial-level initiative to support the Court, she said, stressing the particular need for political support where the Court’s investigations were based on referrals from the Council.  The obligation for the State in question to cooperate was based entirely on the Council’s authority, not on the Rome Statute, and the Council, therefore, must play a key role in ensuring that cooperation was forthcoming.  “We as States are also responsible to ensure that indicted individuals are arrested and transferred to the Court,” she said.  “Clearly, we must step up our efforts in this regard.”

The Court and the United Nations had an historic opportunity — for the first time since the Second World War — to facilitate the prosecution of the crime of aggression, she said.  “The prohibition of the illegal use of force is at the core of the Charter of the United Nations.”  Liechtenstein, after having presided over the Review Conference on the Rome Statute in Kampala, had become the first State to ratify the Kampala amendments in May, and had launched an initiative to support ratifications.  “Criminalizing the illegal use of force between States would be a very significant step forward in the promotion of the rule of law at the international level,” she said.  “Multilateral decision-making is efficient when there is sufficient political will.  It is effective when it has the necessary legitimacy to ensure full implementation.”