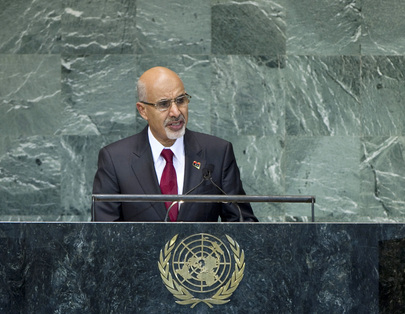 MOHAMED YOUSEF EL-MAGARIAF, President of the General National Congress of Libya, apologized for the crimes carried out by the despot who had ruled his country for 42 years, saying Libyans were determined to build a State of peace, security, good relations with their neighbours and respect for international obligations and human rights. Hailing the late United States Ambassador to Libya, Christopher Stevens, as the “voice of reason and conscience” and “the messenger of peace”, he expressed his deep sadness over the diplomat’s assassination, vowing that the tragedy would strengthen Libya’s solidarity and unity around the aspirations and goals that he had stood for. “We will defeat the schemes of retarded terrorists who do not represent Libya, nor represent Islam”, he stressed, assuring the United States that Libya would pursue the perpetrators and bring them to justice. The Government would spare no effort to bolster protection for diplomatic and consular missions, he added. The mass demonstrations held in Benghazi and other Libyan cities to condemn that abominable crime illustrated the Libyan people’s rejection of violence and radicalism, he continued, also condemning the denigration campaigns against Islam and the Prophet Muhammad. Since its February 2011 revolution, Libya had witnessed significant shifts towards ending social injustice and political tyranny, and embracing democracy. In the past few months, it had begun rebuilding State institutions and elected a General National Congress, which would begin drafting a permanent constitution and form the first interim Government following democratic, transparent elections. Political parties had emerged for the first time since independence, he said. Still, he said, the new Libya was still grappling with serious challenges and security threats caused by illegal activities by the late Muammar Qadhafi’s sons and other members of his regime, as well as by transnational organized crime, terrorism, drug smuggling and human trafficking. To address those ills, Libya had hosted the Regional Ministerial Conference on Border Security in March, which had adopted the Tripoli Action Plan for Border Cooperation. He called on all States to help Libya recover State funds looted by the Qadhafi regime to finance terrorism abroad, and in the fight against corruption. He said Libya was keen to respect all global accords on disarmament, recalling that in November 2011, the Government had quickly notified the Organization for the Prohibition of Chemical Weapons about the presence of additional stocks left by the former regime. Libya continued to cooperate with the IAEA, and called for efforts to expedite the formation of a legally binding agreement to ensure the security of non-nuclear States. It supported a nuclear-weapon-free zone in the Middle East, and called on all States to pressure Israel to commit to that goal. Libya also urged Iran to be more flexible and cooperative with IAEA. It called for urgent action to end Israeli aggression against the Palestinians, for Israel’s withdrawal from the Occupied Palestinian Territory, and for an independent State of Palestine. The Security Council should act promptly to end the violence in Syria while protecting and ensuring that the legitimate demands of the Syrian people were met. He urged the relevant parties to show the political will for genuine United Nations, particularly the Council, in which Africa needed fair representation.