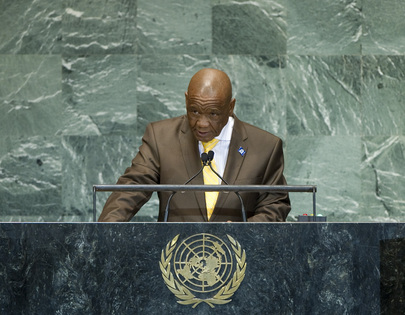 THOMAS MOTSOAHAE THABANE, Prime Minister of Lesotho, said that while there was no doubt that today’s multifaceted challenges could be effectively resolved, it was becoming increasingly difficult to find solutions within the multilateral system. Indeed, unilateral actions that defied civility and international legality were becoming more frequent on the international stage. Despite the lessons of history, there were countries that still believed that they could solve the world’s political problems through war and coercion. He said that there was no comfort in the potential conflict brewing between Iran and Western powers over that country’s nuclear programme. Yet, the looming crisis could be avoided not through threats, but through negotiations based on respect for sovereign equality. “Our generation is already faced with too many problems. Surely we cannot afford another avoidable war,” he added.

On other matters of global concern, he said his Government was saddened by increasing tension between China and Japan over the East China Sea. Rather than fanning the flames of discord between the two sides, “we must instead encourage them to resolve their differences with maturity through peaceful dialogue.” As for the Middle East, he said it was time for individual interests to give way to compassion and reason, so that the Palestinian people could enjoy their inalienable right to self determination “in our lifetime”. The two-State solution had long been held as the only plausible way forward, and the international community must prevail upon Israel to support it. He went on to call for the lifting of the embargo against Cuba, and urged Morocco to cooperate with the international community towards facilitating independence and self-determination in the Western Sahara.

He said that Africa, like several other regions, was trying to rid itself of wars and conflict. “While we thought we had dealt with the scourge of coups d’état, it has recently reared its ugly head in a few countries,” he said, calling on the international community to join with the African Union and stand firm in refusing to recognize any Government that came to power through unconstitutional means. Africa had adopted a “zero-tolerance” policy on the matter and urged the international community to do likewise. He acknowledged that Africa has had some success in settling disputes peacefully, as seen with the United Nations, African Union and other stakeholders working to pave the way for peace in Somalia. He urged the international community to support measures that would prevent that long-troubled nation from relapsing into conflict.

Turning to development issues, he said that along with “gloomy” prospects for global economic recovery, the world faced challenges posed by climate change, including extreme weather conditions, floods, droughts and sea level rise. In Lesotho, drought and floods had heightened food insecurity and famine was looming. He said that last month, his Government had had to declare that Lesotho faced a food crisis, and had to call on its development partners for assistance. Humbly reiterating that call, he said that meanwhile, the Government’s response to the crisis would focus on subsidizing agricultural inputs and promoting drought resistant crops. It would also scale up conservation farming and provide nutrition services to nursing mothers and young children. Further to that, he said that while the outcome of the Rio+20 summit had not met everyone’s expectations, there was still hope that a sustainable future was within reach through ensuring the formulation of the Sustainable Development Goals.