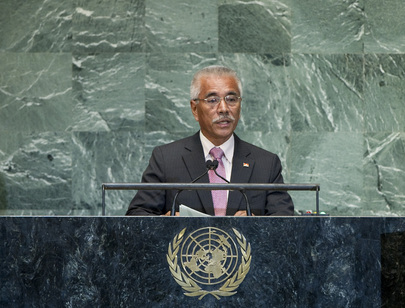 ANOTE TONG, President of Kiribati, discussed the real and existential threat of climate change and sea level rise to the long-term survival of Kiribati. Climate change, which resulted from the unsustainable use of the planet’s resources, was the greatest moral challenge of our time. “Economic growth at all costs must not be our mantra”, he said, especially when those who least benefited from it had to pay the ultimate price. He applauded the Secretary-General’s commitment to addressing the security threat caused by climate change and called on all nations to take the requisite action to address it. He called for bolstering collective efforts to mitigate global greenhouse gas emissions and urged major greenhouse gas emitters to do their part. He also urged development partners to provide the appropriate level of resources and technology to address the current impact of climate change and sea level rise and to prepare for an uncertain future.

While Kiribati was taking measures to ensure it remained inhabitable for as long as possible, the island nation was also preparing for the day when the island could not longer sustain its population, he said. Kiribati was looking to improve its people’s job skills, so they could compete on the global market and migrate with dignity. He noted some positive progress at the recent climate change talks in Bangkok, which built on the decisions made in Durban last year. But, action had been too slow. On consensus issues, the international community must move to implement agreed action without delay, while continuing to discuss contentious issues.

Kiribati was not on track to achieve the Millennium Development Goals, he said. Like other vulnerable countries, it continued to spend a disproportionate amount of its limited resources to fight the onslaught of the rising seas and storm surges on homes, livelihoods and public infrastructure. Given the right support, Kiribati could achieve sustainable development if it utilized available resources of its vast Exclusive Economic Zone, enabling it to reduce reliance on development aid. It could eliminate aid altogether if given the needed support to develop its capacity to harvest and process resources. Kiribati aimed to maximize returns from its fishery resources through creation of its first fish processing plant, a public-private partnership. Seabed mining was another potential revenue source. Maintaining the health and biodiversity of oceans and ecosystems was critical. The Phoenix Islands Protected Area, a safe haven for marine biodiversity, contributed to that aim.

Cross-border initiatives were essential for ocean conservation, he said. At the recent Pacific Islands Forum in the Cooks Islands, the United States and Kiribati announced plans to build a link between adjoining marine parks in the Phoenix Islands, under the umbrella of the Phoenix Ocean Arc. “The international community needs to support such efforts, not as a hand-out but as an investment for the planet’s future,” he said. There was no justice in some people benefiting from the unsustainable exploitation of resources, while others paid the ultimate price. If the international community was to provide a secure, peaceful and prosperous future for its children, then it must go beyond “business as usual” and deliver now.

He was encouraged by the Secretary-General’s commitment to the reform of the United Nations to make it more transparent and accountable, and he welcomed the proposal to strengthen the Organization’s partnerships with civil society and the private sector. He called for understanding and stability to prevail to ensure the survival of people in conflict areas in the Middle East and North Africa. He lauded the continued easing of tensions and improvements of relations across the Taiwan straits, as well as Taiwan’s inclusion in international processes in the World Health Assembly. He hoped that Taiwan would be able to participate and contribute meaningfully in other global institutions and processes.