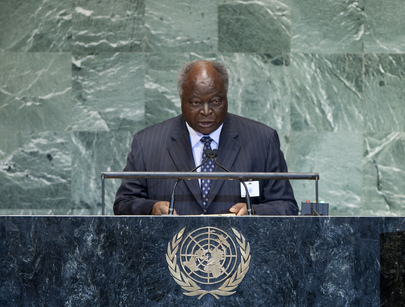 MWAI KIBAKI, President of Kenya, said after a decade of a “blossoming” democracy, his country had scored victories in poverty alleviation, diseases such as HIV and AIDS, education and economic development. Still, poverty, disease and unemployment remained big challenges. “The achievements in our country have been attained through the respect for the rule of law, sound policies, improved governance, as well as open and innovative democracy,” he said.

Regarding the session’s theme, he said Kenya had been built over the last 10 years on a bedrock of peaceful resolution. Where conflicts and disagreements were not resolved peacefully, the subsequent bloodshed and suffering and the collapse of economic and social development led to tragic consequences. Kenya’s own wellbeing and prosperity hinged on sustained peace, security and inclusive democracy in the region, he said, adding that his country supported such efforts by, among others, the African Union. “Such efforts are central to the future of multilateral peacebuilding. They must be the building blocks of international efforts to maintain peace ands security in our region and the world,” he said, welcoming the Secretary-General’s initiative to convene a series of high-level meetings during the week to discus political and security situations in Somalia, the Democratic Republic of the Congo, South Sudan and Sudan.

Encouraged by developments in Somalia, he anticipated the liberation of large sections of the country’s south central area to facilitate the return of some 650,000 Somalis currently in refugee camps in Kenya. He hoped recent developments in Sudan and South Sudan would lead to reducing tensions over border security. Turning to current conflict situations in the Middle East, the Horn of Africa and Central Africa, he called upon all warring parties in the world to lay down their arms and pursue the path of peace, dialogue and inclusive democracy. He was also concerned that no progress had been achieved on the issue of Palestine, which he hoped would soon be welcomed with full membership in the United Nations.

There could be no lasting peace without sustainable and inclusive development, he said, noting Kenya’s appreciation for achievements at the Rio+20 Conference, notably the decision to strengthen the institutional framework and upgrade the United Nations Environment Programme (UNEP). “We are well aware that many of our modern disputes and conflicts revolve around concerns of water, available land and agriculture, forests, rivers and lakes,” he said. “Strengthening global institutions that deal with the environment, our biodiversity as well as climate change must therefore be part of our strategy to avoid conflict and disputes among the peoples of the world.”

It was important that as a community of nations, the world invest in the peaceful settlement of disputes, he said. “However, we must invest first in the prevention of disputes and second, in addressing the root causes of conflicts such as poverty, inequity, disregard for international law, disrespect for each other’s sociocultural and religious beliefs, among others,” he said. “Only by addressing the root causes of conflict and disputes can we hope to find lasting peace in a just and equitable world.”