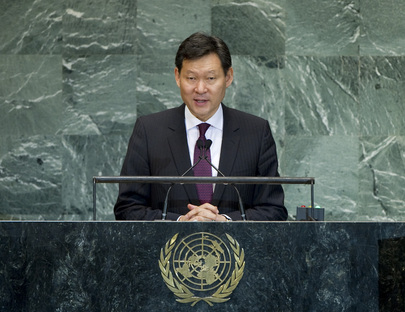 KAIRAT UMAROV, Acting Minister of Foreign Affairs of Kazakhstan, said the geopolitical turmoil in the Middle East and North Africa, as well as natural and manmade disasters, were compelling evidence that the issues of security, stability and sustainable development were increasingly relevant. Thus, world politics should be based on new global principles, which encompassed constructive multipolarity and transparency, trust and political tolerance, and clear pre-eminence of evolutionary forms of development. Those tenets should be enshrined in the core documents of the United Nations and the entire international law system. Fundamentally important was to ensure strict adherence to the principle of non-interference in the internal affairs of States.

He said that the threat of proliferation of nuclear weapons and technology, along with the spectre of their acquisition and use by terrorists, was a most daunting challenge. Possession of mass destruction weapons did not guarantee security or greater independence. Kazakhstan’s own record showed that countries reaped great benefits from renouncing nuclear weapons. By voluntarily giving up the world’s fourth largest nuclear arsenal and shutting down the largest test site, in Semipalatinsk, on 29 August 1991, the country had become more prosperous, stable and influential. He fully supported the Secretary-General’s proposal to adopt a nuclear weapons convention; an important step in that direction would be adoption of a universal declaration of a nuclear-weapon-free world. He looked forward to the establishment for a nuclear-weapon-free zone in the Middle East. This year, Kazakhstan would complete a project to enhance physical security of the former Semipalatinsk test site, which would contribute significantly to non-proliferation.

Kazakhstan, he said, was also actively involved in the fight against international terrorism and drug trafficking in the framework of the Collective Security Treaty Organization, the Shanghai Cooperation Organization and the Conference on Interaction and Confidence-building Measures in Asia. As Chair of the Collective Security Treaty Organization, the country consistently worked to build regional cooperation in that area. Given the increasing attention to international information security, the time had come to consider the introduction of new concepts of international law, such as an “electronic border” and “electronic sovereignty”, as well as the establishment of a “cyber-pool”. In the realm of communications, his country strongly condemned the Internet video and cartoons that offended Muslims; such “disgusting” provocations must be stopped and freedom of expression must be exercised responsibly. At the same time, he condemned the attacks on diplomats and diplomatic missions and called on Governments to protect diplomatic representatives.

Concerning Syria, Kazakhstan supported all efforts to resolve the conflict peacefully, as well as to prevent spill-over of the crisis in the region, he said. Both the Syrian Government and the opposition should resort to diplomacy and not arms, and all nations must unite around the Syrian transition process. Kazakhstan also called for the establishment of conditions necessary to settle the Palestinian issue. It had also consistently advocated a peaceful – exclusively diplomatic – resolution of the situation surrounding the Iranian nuclear programme. Afghanistan’s reconstruction was another important objective, for which the economic dimension should be a priority. Touching on other issues of importance to his country, he highlighted trade expansion and global energy security. Concerning the latter priority, Central Asia had great potential for becoming a global energy centre. In following up Rio+20, Kazakhstan had been selected to promote a sustainable development project. Finally, he said, intercultural dialogue was an important prerequisite for peace and security, noting an initiative of his country to proclaim an international decade for the rapprochement of culture, 2013-2022, which had been adopted by the United Nations Educational, Scientific and Cultural Organization (UNESCO).