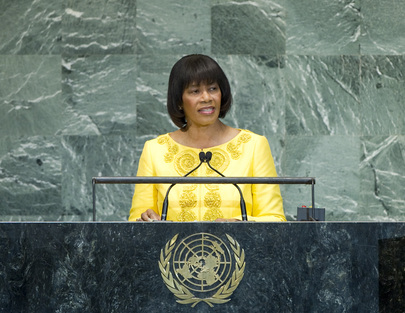 PORTIA SIMPSON MILLER, Prime Minister of Jamaica, said that the United Nations agenda had expanded to address the multifaceted challenges of food security, climate change, global pandemics and the global economic and financial crisis. It had witnessed citizens from several nations “spring” into action with demands for change, while others chose to “occupy” various spaces in protest. In light of that reality, many world leaders “stand as buffers between apathy and anarchy”. Given such events, the theme for this year’s session, “bringing about adjustment or settlement of international disputes or situations by peaceful means”, was therefore most appropriate and timely, she said, adding that “the insecurity, impatience and unease that have emerged worldwide are explosive accelerants.”

She reminded the Assembly of the words of the Jamaican national hero, Marcus Mosiah Garvey, who had said that “poverty is a hellish state to be in. It is no virtue, it is a crime.” The international community must rid itself of the conditions which led to poverty, instead pursuing social and economic policies that would ensure equity and justice and increase the wellbeing and sense of security of peoples. That could only be achieved if Member States worked together in good faith to secure the sustainable future agreed at the United Nations Conference on Sustainable Development — Rio+20 — concluded in June. “Let us create the future we want […] and put our people first,” she said.

The global economy continued to be beset by uncertainty, which was compounded by the lingering negative effects of the financial and economic crises. The global shocks had affected all peoples, threatening communities and weakening families, regardless of hemisphere or region, or whether they lived in a “developed” or “developing” country. The world must not forget that a significant portion of its poorest citizens live in middle-income countries, she said in that respect, noting that that diverse group included both large developing economies and small island developing States, such as those in the Caribbean. Several of those States were highly indebted and extremely vulnerable to external shocks and natural disasters, and faced significant obstacles in their efforts to spur economic recovery and growth. They were hampered by the volatility of energy and food prices, decreases in export commodity prices, and weak capital flows.

Reforms in global economic governance, including the international financial institutions, were required to take into account the need for special and differential treatment for small and vulnerable economies. Refocusing the development agenda in terms of financial flows would also go a long way in helping to bolster their natural resilience and resolve. In that vein, there was also a particularly vulnerable group: the women and children for whom “external shocks” caused real and serious dislocation. Too many mothers had to face tough choices to meet their basic needs, she said, and too many children were subject to abuse. Children, especially girls, were being used as “pawns for economic gain”, including through human trafficking and other exploitative actions. Jamaica was resolute in its commitment to strengthening local and national programmes to eliminate violence against women and children, and called on the international community to also take bold actions to address that “scourge”.

As the world was at the threshold of the 2015 deadline for the achievement of the Millennium Development Goals, she wished to underscore, in particular, the situation of the middle-income countries. In that respect, country categorizations should not serve as obstacles to delivering support to the world’s poorest and most vulnerable. “We urge that middle-income countries not be pushed to the margins of the development agenda, nor be put on the fringe of the development assistance provided by the international community,” she said in that regard. A review of the factors used by the relevant multilateral agencies in the measurement of a country’s wealth was urgently needed; Jamaica therefore supported the proposals put forward by the Economic Commission for Latin America and the Caribbean (ECLAC) for an alternative, but complementary, approach to the criterion of per capita income for the allocation of financing for development.