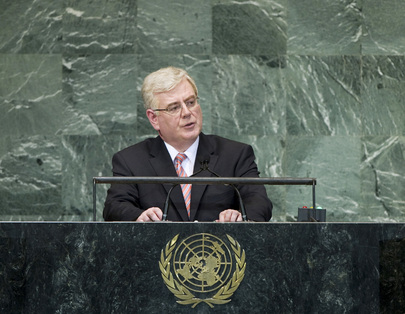 EAMON GILMORE, Deputy Prime Minister and Minister for Foreign Affairs and Trade of Ireland, said history revealed that conflict grew in spaces where human rights were denied; that where deprivation, inequality and injustice eroded human dignity and potential, conflict was the consequence; and that war followed hunger as hunger followed war. The United Nations Charter expressed commitments to human rights, but sometimes words could become so familiar that their force faded with time. “We must make these lofty words relevant again to the peoples for whom we speak here,” he said. They included the 5-year-old orphan struggling to survive in a refugee camp, the hungry mother cradling a dying infant, and those who could not speak publicly in their own countries. “They believe in the words of our Charter and expect us to act on them.”

Describing events in Syria as “an affront to humanity”, he said that, with a national army shelling its own people, evidence of massacres and indiscriminate violence on an appalling scale, the priority was to achieve a ceasefire and get a political process under way, with a strong Security Council to authorize targeted sanctions, including an arms embargo, against human rights violators. To prevent further atrocities, Ireland supported calls for the Council to refer Syria to the International Criminal Court, he said. “If the events in the Arab world over the past two years have taught us anything, it is that leaders who deny the legitimate demands for greater political and economic freedom, and who instead resort to waging war on their own people, will inevitably lose the right to rule.”

Peace and justice remained elusive elsewhere, he said, emphasizing the need for a lasting resolution to the Arab-Israeli conflict. A Palestinian State was long overdue and Ireland welcomed plans for an interim step towards that goal that would accord the Palestinian Authority enhanced non-Member State status. There was no alternative to serious negotiations between the Israeli and Palestinian sides for a comprehensive settlement, he said, stressing that if both their leaders were willing to embark on that path, they would have the unstinting support of the entire international community.

He said that as Chair of the Organization for Security and Cooperation in Europe (OSCE), his country had drawn on its own experience of building peace in Northern Ireland. Quoting distinguished late eighteenth century Irish politician and lawyer John Philpot Curran, he said eternal vigilance was the price of liberty. “If we are to live up to the aspirations of the United Nations Charter, we must also assume the burden of eternal vigilance.” Daily challenges to human rights were painfully obvious. “Our response must be clear and unrelenting,” he declared. “In the words of the Vienna Declaration and Programme of Action, the promotion and protection of human rights is ‘the first responsibility’ of Governments. We cannot and must not shirk that responsibility.”