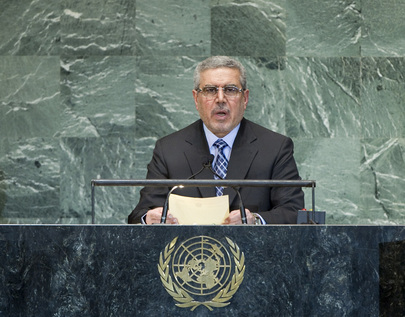 KHUDIER ALKHUZAE, Vice-President of Iraq, said his country’s fast-growing economy would enable it to return to the world economy having seen its gross domestic product (GDP) double, as had GDP per capita. According to the International Monetary Fund (IMF), GDP would reach $150 billion in 2014, he said, adding that Government policies had succeeded in curbing inflation and controlling spending, as well as the accumulated external debt. The national development plan focused on balanced growth, driven by the oil sector, he said, noting that Iraq had reserves of about 143 billion barrels and potential reserves estimated to surpass the proven ones, in addition to some $126.7 trillion in large natural gas reserves. Investments would help substantially develop the oil industry through licensing rounds and the establishment of refineries and other oil- and gas-related industries, he said, noting that production was expected to reach 10 million barrels per day between 2017 and 2020.

He said his country honoured the principles of rule of law, an independent judiciary and freedom of expression, he said. “We proudly announce to you that we don’t have a single prisoner jailed for his belief or opinion,” he declared. “Despite our fight against terrorism, human rights are principles that we respect and promote as a just cause that we do not have any justification to tamper with.” Since Iraq wished to spare its people the ravages of conflict, it hoped other countries would remember its experience and spare their peoples the havoc of terrorism, which could be achieved by adopting the principle of negotiation to resolve conflicts, and resorting to dialogue, reason, law and the peaceful transfer of power. “That is the essence of Iraq’s position regarding the Arab Spring’s revolutions,” he said, adding that his country remained on the side of the people and their legitimate aspirations.

Turning to Syria, he said that providing belligerent parties with weapons was dangerous and led to greater violence, endangering Syria’s very social fabric, he warned. “The events in Syria prove that solving the crisis by violence and force could double the costs incurred by the Syrians and the region as such means only increase the suffering of civilians, destroy infrastructure and augment the number of the displaced,” he said, expressing hope that all parties would realize the danger of betting on a military solution. Expressing support for a Palestinian State with Jerusalem as its capital and United Nations membership, he “unequivocally” rejected Israel’s policies of repression, Judaization and usurpation of land, its disregard for international calls to end its unjust practices, and its refusal to place its nuclear installations and arsenal under IAEA monitoring. However, Iraq favoured the establishment of a nuclear-weapon-free zone in the Middle East.

Looking beyond the region, he condemned the discriminatory policies practised against religious and ethnic minorities, deploring human rights violations against Muslims in Myanmar, who faced a genocide about which the world should not remain silent. Concerning the repulsive insults against the Prophet of Islam following the Internet release of a “trivial” movie, he said the subsequent violent reactions that had almost rocked relations between East and West required the world’s attention. He called for an international ban criminalizing anyone who insulted religions, disrespected religious symbols or insulted the great prophets and messengers. “The recurrence of these obscene actions will supply terrorists with excellent material to attract angry youth and use them in violent actions that threaten peace and security, in which many victims could fall, similar to what happened recently,” he warned.