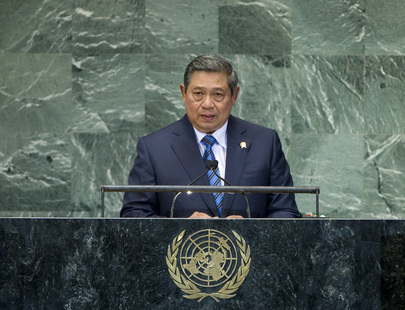 SUSILO BAMBANG YUDHOYONO, President of Indonesia, said that, in the decades since its founding, the United Nations had developed a number of instruments to address conflicts in all their manifestations. Many inter- and intra-State conflicts had been resolved, he said, citing, in that respect, Angola, Bosnia, Cambodia, Timor-Leste and many more. “The question we must ask now is whether these instruments are adequate to address the whole spectrum of conflicts that the world community now faces,” he said. That question was clearly evident in Syria, where the world community was painfully witnessing worsening violence and the unfolding of a humanitarian catastrophe. At the same time, the United Nations was “in paralysis” in responding to the situation. Indonesia, therefore, reiterated its call for the immediate cessation of violence in Syria, calling on the Security Council to unite and act decisively as mandated by the United Nations Charter to bring the situation under control.

“We must adapt to twenty-first century security challenges”, he said, noting the likelihood that the world would see a number of similar conflicts, in different places and in different forms, in the future. While there was no question that the world today was in much better condition than the one in the last century, it had achieved only a relative peace. Instead, it had moved from the era of the Cold War to an era of “warm peace” — a peace in which old enmities and conflicts could still resurface and in which new security challenges arose from the “seismic power shifts” that were occurring in some regions. It was a warm peace in which new progress could easily regress.

In that context, he said, the first thing to do was to evolve a new strategic mindset. The cold war mentality still persisted in parts of the world, and not least in the United Nations itself. For long-term peace — born of trust and mutual confidence — that mindset must be left behind. A reformed Security Council was needed, he said in that respect, one that reflected the twenty-first century reality and provided security to all. Work must also be undertaken to perfect the instruments of peace, which was “robust regionalism”. The Association of South-East Asian Nations (ASEAN) countries, for their part, had seen how such regionalism could be a force for peace and cooperation. “Once the cockpit of border wards and the proxy of extra-regional powers, Southeast Asia has now come together,” he said.

A universal culture of mutual tolerance and mutual appreciation of one another’s religious convictions must be evolved, he said. Despite the determination of the United Nations in that regard, the defamation of religions persisted, as had been seen in the film Innocence of Muslims that was causing an international uproar. The Universal Declaration of Human Rights underlined that, in exercising their freedom of expression, everyone must observe morality and public order. “Freedom of expression is therefore not absolute”, he said. Hence, he called for an international instrument to effectively prevent incitement to hostility or violence based on religions or beliefs. For good measure, there should also be a continuing dialogue among faiths, civilizations and cultures, which should translate into actual cooperation.

In addition, the world must master the art of preventive diplomacy, he said. Most disputes were not intractable, and there was usually a window of opportunity for resolving them. That was what ASEAN had done with the potential conflicts in the South China Sea. Finally, the culture of peace, mutual tolerance and appreciation, as well as cooperation, must be supported by the “right kind of economics”. People needed to be fed, sheltered and assured of a future with opportunities. Indeed, the price of inequality between nations and within nations could be a tension born of grievances that could, unless effectively addressed, lead to radicalism and even violence, and threaten international peace and security. The solution was to form a global partnership for poverty eradication and the attainment of the Millennium Development Goals, as well as to formulate a post-Millennium Development Goals agenda that could be fully carried out.