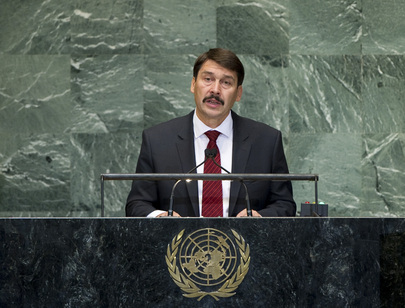 JÁNOS ÁDER, President of Hungary, said the rule of law was an important matter, as his country had belonged to the communist-socialist bloc for “long decades”. In 1949, four years after the end of the Second World War, the communist takeover had been completed and the multiparty system eliminated. Most party leaders had been forced into exile or imprisoned, he said, adding that, born 10 years later, he had spent his early adult years in a dictatorship. That generation, like that of their parents, had been deprived of human rights.

The 1980s had brought the fall of the Berlin Wall and the Iron Curtain, as well as democratic changes to Hungary, with free elections held in the spring of 1990, he continued. In April 2011, the National Assembly had adopted the Fundamental Law, the youngest Constitution in Europe, which incorporated almost all elements of the European Charter of Human Rights. A new element — constitutional constraints — had been imposed to curb irresponsible public spending and reckless increases in State debt. It also provided guarantees on fulfilling international legal obligations and complying with international law, he said, adding that numerous provisions related to basic rights.

Turning to the issue of water and sanitation, he said 90 per cent of all communal wastewater and 70 per cent of industrial wastewater in the developing world was discharged into rivers without treatment. The chemical revolution of the post-Second World War period had also had serious adverse environmental implications. There was not enough water to meet daily consumption needs. The need to manage water made international cooperation indispensable, since half the world’s people lived in “shared” or “joint” water-catchment areas. The same river was expected to provide water for two or more countries, he said, adding that the stakes were also high in agriculture if the sector wished to produce enough food for another 2.5 billion people by 2050. Hungary viewed water and sanitation as among the most important questions of the twenty-first century, he said, noting that his country had participated in the Friends of Water Working Group created under United Nations auspices. Hungary was ready and willing to share its experience with others, and welcomed all interested parties to the conference on water and sanitation to be held next year in Budapest.