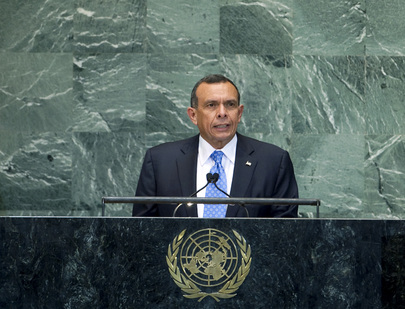 PORFIRIO LOBO SOSA, President of Honduras, said the Assembly reflected a wealth of diversity, where States worked to overcome differences and respond to common problems. In such work, the international community must be partners at all times, ready to put forward solutions and reforms to strengthen the right to express that diversity. No nation should be left uninvited. Honduras had carried out reforms that respected individual rights and had invited regional and international organizations to visit.

On gender issues, he cited a policy that helped women achieve full equality and equity. His Administration projected that women’s participation in 2013 elections would reach 40 per cent, and 50 per cent in the 2017 elections. Congress had adopted a law against trafficking in persons, which complemented recommendations put forward by international human rights bodies. Another part of the country’s vision was to end the exclusion of indigenous peoples and peoples of African descent. Last year, Honduras had hosted the first World Summit on Peoples of African Descent, and next year, would host one for indigenous peoples.

Turning to the challenges ahead, he said estimates showed that illicit activities — such as money laundering, bribery, trade piracy, and trafficking in both persons and weapons — represented 10 per cent of global gross domestic product. Such “astounding” financial resources not only corrupted societies and Governments, but threatened international security. Honduras had been a victim to other countries’ insatiable appetite for drugs, and the greed of traffickers in developed countries whose profits were stained with the blood of the innocent. Honduras was neither a consumer, nor producer of drugs. Traffickers came from the global north; but those who died were Honduran. The goal was to defend sovereignty and territorial integrity in the face of such challenges. The entry of drugs into Honduras must stop.

For its part, Honduras had updated its regulatory framework and security bodies, he said, and prevention programmes now provided better opportunities for youth. Data from the Independent Observatory on Violence in Honduras showed an 8.5 per cent reduction in homicides this year. Combating organized crime was a shared but differentiated responsibility, and he underscored Colombia and Chile’s cooperation in that regard, as well as the memorandum of understanding between Honduras and the United States. He also lauded the United Nations Office on Drugs and Crime (UNODC).

In other areas, he said Congress had adopted laws to bolster education. While he defended teachers’ rights to dissent and demonstrate, the young peoples’ right to education should not be subject to any interruption. UNICEF data showed some 600 school days had been lost over the last 10 years, meaning that a student who reached ninth grade had only attained a sixth-grade education. “We are denying opportunities to those who need them the most,” he said, declaring that classrooms were sanctuaries that must never be closed. Equitable growth, coupled with strong education, was the best way to reduce poverty. He cited a cash-transfer programme that had reached 30 per cent of poor families as one response to social exclusion. In sum, he said Honduras was committed to United Nations reform and strengthening its universality based on just, equitable and inclusive representation.