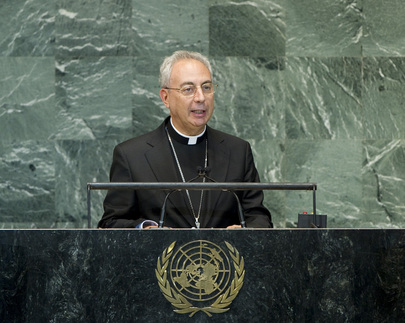 DOMINIQUE MAMBERTI, Secretary for Relations with States of the Holy See, said the world was witnessing the expansion of regional conflicts, making the theme of the sixty-seventh session all the more timely. The United Nations Charter, the Vienna Convention and other core instruments of international law set the framework for ensuring a peaceful and stable world, but while they were indeed ambitions and comprehensive, the world had changed dramatically over the past 65 years, he said. The history of humankind had always been marked by paradoxes, and such was the case today, as the divide between the “haves” and “have nots” continued to grow, especially in terms of economic equality and access to new communications technology. Regional conflicts remained a serious threat that should serve to rally the international community towards a common cause, he said, noting also that he United Nations, as well as regional organizations, continued to address situations of conflict and tensions, particularly in Africa. Yet, the world body was increasingly seen as dysfunctional — a theatre where political games were acted out. Many people wondered why an Organization built on such a solid legal framework was unable to outline and ensure a comprehensive and functioning system of global governance. Suggesting that the cause could indeed be a moral lapse, as well as a loss of trust in the efficacy of dialogue, he stressed that the priorities outlined in the Charter guided all stakeholders to promote human rights and protect the vulnerable. Nowhere was that goal more critical than in Syria, where the international community must work together to protect civilians and ensure that the Joint Special Representative received adequate cooperation, he said. Only an international community with values rooted in dignity could provide solutions to such challenges as drug trafficking, economic turmoil and lagging development, he continued. He also called for continuing the debate on reforming and democratizing international financial institutions, especially to correct the damage wrought by short-sighted financial polices. The international community must place a priority on human rights and humanity, and not reduce human beings to “numbers” or “market concepts”. He declared: “Human beings are not numbers; we are talking about people, every one of whom has rights.” Religion worked for the well-being of all and led human beings to work for the benefit of others. All extremist activities contravened religion, as well as the goals of tolerance and peaceful coexistence. The international community had always welcomed the Holy See’s contribution to ensuring family unity, human dignity and religious freedom, he noted. The Holy See also supported the use of harmonious dialogue, he said, stressing that it was only through such values that he United Nations could carry out its duties for all humankind.