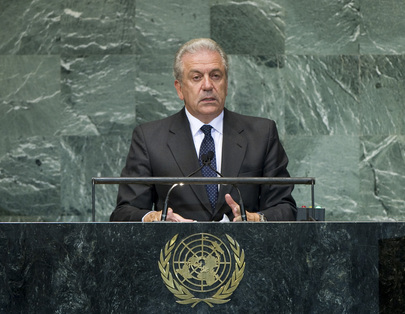 DIMITRIS L. AVRAMOPOULOS, Minister for Foreign Affairs of Greece, said his Government had decided to bid for membership on the Human Rights Council during 2013-2015 to enhance international cooperation on the promotion and protection of human rights. He said the “name” issue involving Greece and the former Yugoslav Republic of Macedonia was, beyond its semantic dimension, “an important piece in the puzzle of putting to rest irredentist notions and attempts to rewrite history in our region”. Pointing out that he had been informed of what the representative of the former Yugoslav Republic of Macedonia had said in the General Assembly today, he declared: “Distorting reality in front of the entire international community and using nineteenth-century rhetoric in the twenty-first century was counterproductive and will lead us nowhere.” He added: “Populism and nationalism is the worst possible mix for the promotion of anyone’s national interests and the stability of our region.”

He stressed that the solution lay in a fair settlement, “a name with a geographical qualifier, since Macedonia is a geographical region that overlaps the territories of three countries, the largest part in Greece and then Bulgaria and the former Yugoslav Republic of Macedonia”. The name must be used in relation to everyone, he said, adding that resolving the issue would help realize the vast potential in “our relations”, to “our mutual benefit”. Such a scenario would lead Greece to be the staunchest ally and friend of the former Yugoslav Republic of Macedonia in its efforts to realize its Euro-Atlantic aspirations.

Greece was also consistently pursuing stronger cooperation with Turkey, he continued, expressing support for that country’s candidacy for full European Union membership, on condition that it met all relevant membership criteria and carried out the necessary reforms. It was of the utmost importance that Turkey gave tangible signs of full respect for international law and abandon attitudes like its standing threat against Greece, or its attitude towards Cyprus, which undermined efforts to build trust. Greece supported the efforts of Cyprus to pursue negotiations with the Turkish Cypriot community, under United Nations auspices, with the ultimate aim of reuniting the island. He applauded the decision by Cyprus to act on its sovereign right to exploit natural gas deposits in its exclusive economic zone.

On his country’s economic crisis, he said the new tripartite coalition Government was implementing an ambitious economic adjustment programme to improve the country’s macroeconomic outlook and achieve fiscal adjustment, while at the same time addressing structural reforms aimed at promoting growth and creating jobs. That effort had produced impressive results, he said, noting that the primary deficit had been significantly reduced. The business and investment climate was on a positive path, he added. While the Greek people were suffering tremendously under the nation’s austerity programme, a broader view showed that the crisis was not just Greek or European, but global in scope. In the 3,000 years of their history, the Greek people had known “crises more serious than the present one”, he said, declaring: “We survived, and excelled.” He added: “Let me assure the General Assembly and the family of nations that Greece will make it.”