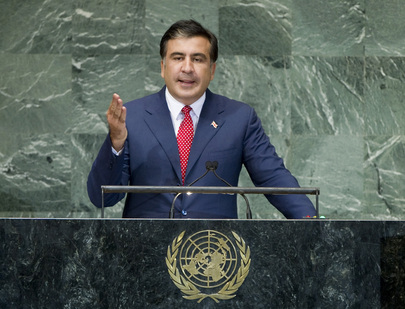 MIKHEIL SAAKASHVILI, President of Georgia, said 20 months after a young Tunisian’s desperate act had generated hopes around the world, joy had been replaced by broken promises, and messages that the international system was more stable when fewer societies were open. “I came here today to tell the opposite,” he said, “to make the case for open societies”. Following the attack on the United States consulate in Benghazi, he had been struck by United States diplomats who still believed that Libya’s liberation was a “good thing”, and by Benghazi citizens, who just days ago, had stood up against the fundamentalist militias responsible for the violence.

He had been struck by the visit to the United States last week by Aung San Suu Kyi, he said, and her story of progress towards freedom in the face of seemingly impossible odds. A free society was not one without problems; on the contrary, it was one where problems were more visible and arguments were open for all to see. Georgia had confronted democracy’s challenges in the last week, amid evidence of prison abuses. Those responsible had been arrested and two Ministers resigned. “This is how democracies learn,” he said. Building an open society entailed painful learning and significant risk taking. “These risks are worth taking”.

Events unfolding in Georgia today were part of the broader global question about whether the quest for democracy could and would endure, he said. Georgia would remain an open society. On 1 October, Georgians would vote in parliamentary elections, renewing the social contract that allowed them to freely choose their leaders. All recent elections had been observed by international observers, and he had pledged that this year’s vote would be even more free and fair than in the past. Funding and air time had increased on all national channels for ads by all political parties. A code of conduct had been created to prevent political intimidation, vote buying and hate speech.

But not all actors in the Georgian political landscape shared those principles, he said, noting that responding to attempts to “short-circuit our democracy” was straightforward: democratic, transparent, rule-of-law based processes would not be compromised. Georgia was a young democracy and understood that value came from engagement with the international community. It had invited credible bodies to monitor its elections, from the Organization for Security and Cooperation in Europe (OSCE) to the European Parliament and United States Congress. Georgian democracy would prevail only if elections remained a Georgian process.

He went on to say that Russian forces were currently undertaking an illegal military build up in South Ossetia, having made the “extraordinary” decision to hold military exercises in the North and South Caucasus on the eve of Georgian elections. He urged the Assembly to speak in a unified voice against such threats and support Georgia’s sovereign, democratic institutions. He made his appeal because the United Nations had been created to defend the integrity of all nations against such dangers, to ensure the world would never again be a lawless ocean where big sharks ate smaller fish without a global reaction.

“Pay attention and send the right signals,” he stressed. Georgia’s transformation, and the hostility it generated among those threatened by freedom, made it a test case for the entire region. Georgians would overcome the dark Soviet legacy of crime, corruption, domination, intimidation and despair. Georgia’s view was clear. Stability could not be won at the expense of liberty, nor lasting prosperity at the expense of individual rights. In every society, people would ultimately demand the right to choose their future and only Governments that met that demand would achieve stability. Fear defined autocrats, and trust, democrats. “Let us all trust our citizens,” he said. “Let us defend the institutions that support, strengthen and preserve our choice to be open and free.”