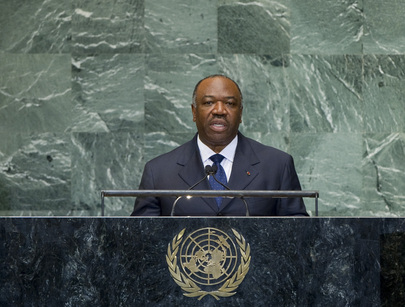 ALI BONGO ONDIMBA, President of Gabon, expressed hope that the efforts of the Special Representative for Syria would help stop the ongoing violence in Syria and lead to dialogue.  Turning to Mali, he condemned attempts to partition the country and the destruction of its World Heritage Sites.  Expressing support for the African Union’s efforts in trying to re-establish Mali’s territorial integrity, he called on the Security Council and Member States to support a United Nations strategy for the Sahel region that would take security, governance, development, human rights and humanitarian aspects into account.

He recalled that while a member of the Security Council, his country had joined others in responding to the call of the Libyan people.  The United Nations should take action to restore peace and rebuild that nation, he said, reiterating condemnation of the attack on the United States consulate in Benghazi.  He called for continued support for the Democratic Republic of Congo in the security, political and humanitarian spheres.  Gabon also welcomed the adoption of Somalia’s provisional constitution, as well as the election of its new President, he said, adding that his Government remained committed to working with that country as it had done in the past.  Through cooperation between the United Nations and the African Union, security in Somalia had improved well beyond Mogadishu, he noted.

The conflicts which continued to destabilize the world, he said, are a reflection of people’s aspirations for peace and security, justice, development and sovereign equality of States.  Those aspirations are equally of the people of Palestine and the people of Cuba, he said.  The Palestinians wished for peace and security alongside its neighbours with secure and internationally recognized borders, while Cuba wished for a lifting of an economic embargo which had been hurting it commercially and financially.

Emphasizing that regional integration was a means to mutual economic development, he described efforts in Central Africa to put confidence-building measures in place, including the rapid alert mechanism, with the support of the regional bureau of the United Nations.  Turning to Gabon in particular, he described efforts to turn it into an emerging market country by 2025 through the construction of strategic infrastructure, strengthening the rule of law and effecting various social, political and economic reforms.  To diversify the economy and create jobs and wealth, Gabon was also working to develop its export market.  Regarding support for sustainable forests, natural resources and biodiversity, he said Gabon remained committed to fighting the smuggling of protected species.