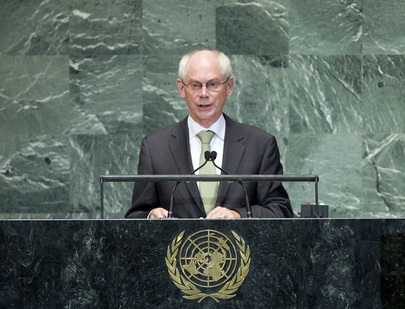 HERMAN VAN ROMPUY, President of the European Council, said that when upheaval and historic transformation had begun sweeping through the Arab world in 2011, those events had spark mixed emotions in the wider international community.  Yet, while there had been fears of a rise in extremism and regional bloodshed, overwhelmingly, the world had looked on with understanding and hope.  Europe, geographically close and deeply involved with many of the countries undergoing those changes, had been keenly aware that it could be directly impacted.  “So, of course, expectations ran high; it was tempting to read the events in Tunis or Cairo as the opening pages of a fairytale.  But, this is the book of history,” he said, stressing that that tome contained dark chapters, some of which were being written “at this very moment.”

Indeed, new democratic institutions did not magically run smoothly; moribund economies could not be reawakened with the wave of a wand; and deep tensions did not vanish in the mist once a dictator was gone.  “The long path of transition lies ahead.  There will undoubtedly be disappointments along the way; there will be wrong turns, hurdles and setbacks,” he said, expressing the belief that the journey was nevertheless heading in the right direction.  “And there is no turning back:  whatever the future brings, the Arab Spring will remain a turning point.”  Once the voices of the region’s people had finally been unleashed, they could never again be silenced.  While it was the responsibility of the concerned countries to chart its own course towards ensuring the aspirations of its peoples, the European Union was committed to standing by their sides every step of the way.  The regional bloc was “in it” for the long haul.  “We still believe in the message of the Arab Spring,” he declared.

He explained that Europeans were well placed to recognize that political change was not painless and did not occur overnight.  Europe knew about long transitions, and in fact, when integration began in the region, most of the countries that were now members of the Union were not yet democracies.  “For us, transition of such magnitude should not be judged by its speed, but by its direction and by the progress achieved through countless steps forward,” he said, emphasizing that the starting point was free and fair elections.  In that regard, Tunisia, Libya and Egypt, among others, were to be saluted for their organization of polls that had allowed many of their respective citizens to vote freely for the first time.

At the same time, the transitioning countries should remain cognizant that generating jobs, providing social justice and ensuring free expression would require their nascent democratic institutions to overcome, “every single day”, obstacles such as corruption and bureaucratic red tape.  Those Governments would also need to maintain the political determination to ensure inclusiveness and broad participation in the processes that were under way.  For its part, the European Union would offer advice to entrepreneurs and officials and would help train judges and police officers, and provide support to journalists and civil society groups.  He said that a democracy could only flourish when equal rights were guaranteed in law and practice, for all people, whatever their gender, religion, language or ethnic identity.

He went on to say that bringing together and reconciling former enemies in a common desire for peace and prosperity had been one of the European Union’s greatest achievements.  And while respect, tolerance and non-violence were core values, they were fragile, and sustaining them required constant attention, especially in a digital world where messages of all types spread at lightning speed and could be easily exploited.  “Tolerance is the ability to withstand criticism, to offer dialogue, to refrain from violence,” he said, adding that respect for the faiths and beliefs of others was also key for harmonious living.  “Each and every one of us in this room has a responsibility in defending and promoting tolerance, in and between countries, as well as respect,” he said, stressing that incidents such as the killing of United States Ambassador to Libya Chris Stevens could never be justified, regardless of the motivations.

Continuing, he joined Europe’s voice to those that had deplored the “civil war now raging in Syria.”  Frankly speaking, even though confronted with mass killings of innocent civilians, the international community had not been able to stop the violence.  Europe and others were providing humanitarian assistance and supporting the efforts of the United Nations to bring about a peaceful solution, “but we will remain powerless unless the international community unites in common determination to end this senseless violence, which threatens to wreak havoc in the whole region.”  The longer the bloodshed continued, the more radicalized people would become and the longer it would take for the wounds to heal, he said.

As he turned to other pressing issues, including the need to address the instability and humanitarian needs in the Sahel and finding a negotiated solution to the Iranian nuclear issue, he said that all major economies also needed to do their part to put the world economy back on track.  Indeed, the sense of resolve witnessed after the collapse in 2008 of marquee financial institutions on Wall Street and elsewhere seemed to have waned.  “Global growth depends on structural reforms in each of our countries and in reducing the macroeconomic imbalances between them,” he said, stressing that Europe was doing its part.  No effort would be spared to overcome the current difficulties in the eurozone, including through setting up stronger firewalls to guarantee the stability of the euro, and building a banking union that would better manage the financial sector.