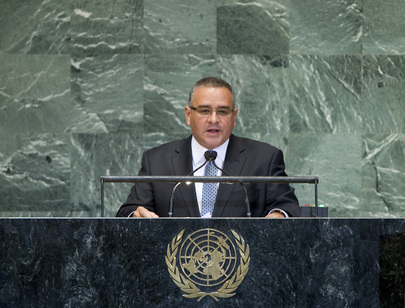 CARLOS MAURICIO FUNES CARTAGENA, President of El Salvador, said some political forces, leaders, intellectuals and the media continued to look at the world through cold war eyes, as if the last half century had not wrought strong changes in the global political arena. Such attitudes impeded efforts to strengthen democracy, he said, describing his country as a clear example of contradictions between rule-of-law processes and the persistence of conservative forces still advocating communism. While the country was a fine example of conflict resolution through dialogue, it also embodied structures firmly anchored in the past and in the cold war.

The country’s emergence from a 12-year-long civil war was an example of how efficient dialogue and negotiation could be, he said, pointing to the 1992 peace accords. The United Nations had acted as a mediator in that conflict, after which Salvadorans had begun a new process of slowly consolidating democracy and creating modern institutions. Three years ago, El Salvador had lived through another landmark period in its quest to strengthen democracy. After 20 years of one-party rule, a change in administration had opened the doors to true democracy. The Government had changed the rules of the game, guaranteed judicial security, eliminated privileges granted under previous administrations, and pardoned crimes committed by State agents during the war.

But not long ago, the country began to suffer an institutional crisis between the Supreme Court’s constitutional chamber and the Legislative Assembly that tested the solidity of democracy, he said. That conflict, which lasted five months, arose from different conflicting interpretations of the Constitution. The lack of agreement between the parties was referred to the Central American Court of Justice. After 17 days of deliberations, an agreement finally was reached, which led to the appointment of a new Supreme Court of Justice and the normal functioning of the country’s judiciary. El Salvador successfully settled an institutional conflict through dialogue that in other areas would have led to a coup d’état.

The strengthening of democratic processes should bring about deep changes in nations’ socioeconomic structures, he said. That clearly should come within the framework of the rule of law. Marginalization of communities and their exclusion from progress could not be tolerated. The phenomenon of migration was an errant reflection of the need to change quickly. Latin America had taken important steps in that direction and today it was aware that no model was successful if it left the great majority of people on the margins. Everyone must be involved and reap the benefits if a socioeconomic model was to be successful. The unequal distribution of goods and wealth, climate change, and the lack of global control over financial flows led to reoccurring crises. That must change.

He stressed the need to ensure public security and fight organized crime, noting that his country was today the region’s focus in that regard. Once the second most violent country in Central America, with on average of 15 murders a day, it now had on average 3.8 murders a day. Over the last three years, El Salvador had adopted a policy of public security, with the Catholic Church acting as intermediary. In order for violence and organized crime to disappear, the situation of youth without hope or opportunity must change, he stressed. Without the strong support of narcotics-consuming countries, the war against drugs could not be won, he warned. Central American nations, alongside Mexico and Colombia, had taken on that battle, he said, calling on the United States to join them.