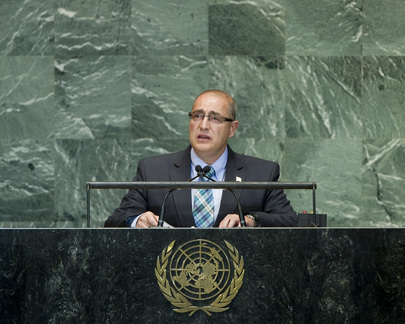 MARCO ALBUJA, Deputy Minister for Foreign Affairs and Political Integration of Ecuador, said it was time to end the illegal use of the United Nations by certain Powers to advance their own political and economic interests, thus de-legitimatizing the Organization and distorting multilateralism. Calling for dialogue, respect for human rights and self-determination, he declared: “Enough of imposing geopolitical visions by force.” Hailing Colombia’s steps to foster dialogue in its efforts to resolve its internal disputes, he said persistent unilateral actions by certain Powers jeopardized the ability of international institutions to offer legitimate responses to global problems. Ecuador called for “real reform” to make the United Nations more democratic and modern, and to prevent its illegal use. To ensure true multilateralism, no Member State should have veto power, and all Member States must be equally represented, he said, advocating comprehensive reform of the Security Council in terms of its size, composition and working methods in order to make it more representative. He also called for revitalization of the Assembly. An example of the disequilibrium in the United Nations was seen in the United States blockade of Cuba, he continued. Underscoring that the United States could not continue to include Cuba in its spurious list of countries sponsoring terrorism, he said the latter had stated that its territory had never been, and nor would it ever be, used to harbour terrorists. Former President Jimmy Carter recognized that and had stated that the Havana Declaration to foster dialogue between the Government of Colombia and the Revolutionary Armed Forces of Colombia had invalidated the claim that Cuba must be on the list of State sponsors of terrorism, he said, supporting the former president’s claim that removing Cuba’s name from the list would open the possibility for more sincere dialogue between the two countries. Ecuador supported the Palestinian bid for enhanced United Nations Membership based on 1967 borders, and Argentina’s historic right to the Malvinas (Falkland Islands), he said, calling on the United Kingdom to accept its request for direct negotiations over their dispute. On Ecuador’s continuing diplomatic confrontation with the United Kingdom relating to the inviolability of diplomatic missions, he said Ecuador had received support from the Governments of the Union of South American Nations and the Bolivarian Alliance for the Americas and OAS, he said. He also condemned the 11 September attacks on the United States diplomatic premises in Cairo and Benghazi. Emphasizing that there could be no double standards in the human rights arena, he said his country’s 2008 Constitution aimed to better guarantee human rights and deepen socio-economic reform. Since its passage, the Government had amended archaic policies relating to the rule of law so as to reflect the principle of “Sumac kawsay” — life based on dignity, solidarity and equality. Ecuador had been internationally recognized for its efforts to end discrimination against people with disabilities, he said, noting that the Vice-President had been nominated for the Nobel Peace Prize for his efforts in that regard. Ecuador hosted 60,000 refugees, the largest number in Latin America, as well as almost 500,000 economic migrants, who enjoyed political and social protection and economic subsidies. Ecuador had also been the first in the world to recognize the right of nature to develop and reproduce. It was a leading promoter of sustainable development initiatives in the region, and played a critical role in the United Nations Framework Convention on Climate Change. As part of its tradition of sheltering victims of political persecution, the Government had granted asylum to the Australian Julian Assange, an incident that presented a unique opportunity for the global community to debate the political, legal and humanitarian aspects of exile.