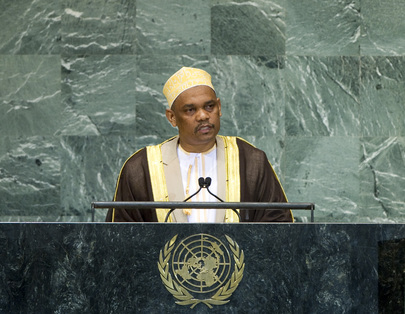 IKILILOU DHOININE, President of Comoros, said that, as had been the case last year, the General Assembly was being held yet again in a global context marked by uncertainty and multifaceted crises. It took place at a moment when Syria was suffering a great tragedy, and the recent resignation of former Secretary-General Kofi Annan as the Joint Special Envoy to that country showed the complexity of managing such a crisis. It, therefore, behoved the international community to act. Equally important was the Palestinian cause, he added, which had long awaited a just solution. Comoros reiterated its full support to the Palestinian people, and associated itself with the solution of a Palestinian State living side by side in peace with Israel. Noting, in addition, that the situation in northern Mali also remained a major source of concern, Comoros associated itself with the Economic Community of West African States (ECOWAS) and African Union efforts to bring an end to the conflict.

A few decades ago, Comoros had committed itself resolutely to the path of democracy, and now it lent its support to the cause of peace, justice and fairness. As President, he said, he would “leave no stone unturned” in his promotion of democracy and good governance in Comoros. In that regard, he had given priority to the fight against corruption, with a new anti-corruption law and establishment of a national commission to that end.

The global financial and economic crisis lay at the heart of this year’s General Debate yet again, he went on. The crisis had revealed the urgent need for in-depth reform of the international financial institutions. The effects of the crisis — and a related energy crisis — were increasingly palpable, especially in developing States. Another major concern was climate change, which disproportionately affected small island developing States. In Comoros, devastating rains had recently come down, affecting an estimated ten per cent of the population. Conveying gratitude to all partners that had provided humanitarian assistance in response to that unprecedented disaster, he noted that the country had elaborated a rapid recovery plan which spelled out actions aimed at rebuilding over a 6-12 month period. He called on partners to help support that recovery effort, whose cost was estimated at some $18 million.

The time had come to address several important issues at the international level, including making operational the Copenhagen Climate Fund. Commitments to States of the global South must also be honoured, and countries must abide by commitments in emission reductions. Also, no effort should be spared in achieving the Millennium Development Goals. Faced with those challenges — all of which were equally important — he called on the most developed States to ensure that mechanisms aimed at mitigating the financial crisis in Europe also be applied to the most fragile States in order to prevent more serious consequences, in particular as they depended on the financial contributions of their diasporas. Comoros, a beneficiary of the International Monetary Fund’s extended credit programme, also hoped to reach, by December 2012, the point of achievement of the initiative for small heavily-indebted countries.

Finally, he called, yet again, on France to engage in “candid and sincere dialogue” on the question of the Comorian Island of Mayotte. The fact that the island remained under French administration constituted a threat to the peace and stability of the three other Comorian Islands, he said, adding that it was no secret that the island had always served as a base for the enemies of Comoros, who did not wish to see the island progress. This year, several men, women and children had perished in the waters separating the Comorian islands of Anjouan and Mayotte, as a result of the visa imposed by France on the islands of Anjouan, Grande Comore and Moheli. He hoped, in that regard, that France would honour its commitments under international law and respond positively to the calls to return Mayotte to its natural home in the Comoros.