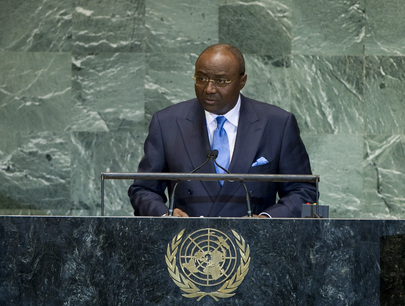 PIERRE MOUKOKO MBONJO, Minister for External Relations of Cameroon, said this year marked intense activities for the United Nations, including discussions on current major issues and responses to them. Two events were particularly important to his delegation. The first was the United Nations Conference on Sustainable Development, held in Rio in June, 20 years after the Earth Summit. The event had defined “the future we want to leave our children”. Indeed, to create a viable world and leave it to the future generation, a green economy was the most effective solution.

He said Cameroon had already begun taking action in that regard. Among the steps being taken were initiatives to create a low-carbon society and to turn wasteful consumption patterns into a sustainable one. Progress should be gradual and it must have the support of the international community. As part of the outcome of the Rio+20 Conference, Member States expressed support for Africa on various fronts, including in the areas of technology transfer and trade. The second area of importance to Cameroon concerned the United Nations Conference on Trade and Development (UNCTAD), whose activities must be strengthened. This year’s Conference, held in Doha, Qatar, had addressed issues of globalization, poorly regulated trade and the problem of underdevelopment.

Highlighting next the downturn in the global economy since 2008, he said Europe, the United Nations and Japan were experiencing difficulties. Now, emerging nations, which had shown high-economic growth, were slowing down. Even if they continued to grow, the effect of the global economic downturn would be felt. The objective was to achieve harmony between the functioning of economy and finance, but it was hard to see how that could be met. The Group of 20 (G-20) and the World Trade Organization had analysed the state of global economy to establish the right balance. It was up to the international community to act urgently, for which he encouraged broad consultation that took the needs of each country into account. International solidarity could also play a role. Drawing a lesson from Cameroon’s own experience, he said debt relief could help. The country was now taking advantage of its rich natural resources to develop agriculture, energy and mining industries.

He said the theme of this debate, “bringing about adjustment or settlement of international disputes or situations by peaceful means”, enabled delegates to revisit the United Nations Charter. The principles enshrined therein were a good reminder for those involved in the settlement of conflict, including in the Sahel and Mali. Such tensions highlighted the risk of resorting to force. Be it international terrorism, threats to individual security, or violation of territorial integrity, peaceful means must first be explored. There might be cases when such interventions were inevitable, but precaution must be exercised. It was clear that the most desirable way was prevention and negotiation.